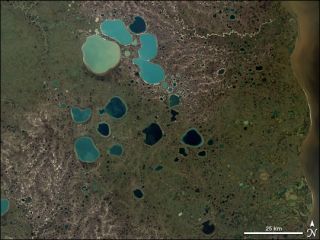 Until now, no one knew for sure how many lakes exist on Earth.

Blame geography — most of the world's lakes are in places where humans don't live, said David Seekell, an environmental scientist at Umea University in Sweden. "This is something one would have assumed had been done long ago, and was in a textbook somewhere," Seekell said.

Lake size was a liability, too. Millions of lakes are too small for mapmakers to bother charting.

Instead of counting lake by lake, earlier estimates were statistical guesses, based on the number of lakes in a parcel of land or on average lake size. One widely cited study from 2006 estimated the lake total at 304 million. [5 Surprising Facts About Lakes ]

A new study published Sept. 16 in the journal Geophysical Research Letters sidesteps these problems. With high-resolution satellite data and supercomputers to check every cloudless pixel, researchers now have the best count yet of lakes on Earth. The result? There are 117 million lakes in the world.

Yet the bodies of water cover more land (3.7 percent of Earth's surface) than previous studies had predicted. This is because quite a few medium- to large-size lakes were missing from older databases, said Cory McDonald, a research scientist with the Wisconsin Department of Natural Resources, who was not involved in the study.

"I was surprised that the total surface area they measured was much greater than previous estimates," said Cory McDonald, a research scientist with the Wisconsin Department of Natural Resources, who was not involved in the study. "We knew there problems with the extrapolation methods used to fill the data gap for the small lakes, but previous estimates assumed we had a pretty good handle on the medium- to larged-sized ones," he told Live Science in an email interview. "This study largely puts to rest the long-debated questions of 'How many lakes there are in the world and how much surface area do they cover?'"

About 90 million of the lakes fall in the smallest size category, measuring 0.5 to 2.5 acres (0.2 to 1 hectare), the study reports. That's equal to a country house lot, a large farm pond or 1.9 American football fields.

"Most lakes are in the far North, and there's actually quite a few of them," said Seekell, a co-author of the new study. "Even if they're small and no one sees them, they are potentially important for global-scale environmental issues like the carbon budget," he told Live Science.

Climate scientists believe lakes influence greenhouse gas levels in the atmosphere. Lakes pump out carbon dioxide and methane — both greenhouse gases — but they can also lock away carbon for centuries by trapping it in their cool bottom muds. Without an accurate count, the role of lakes is difficult to assess, Seekell said.

According to the new results, the world's lakes cover about 2 million square miles (5 million square kilometers), which is 3.7 percent of the land uncapped by glaciers.

Most lakes are in the Northern Hemisphere between 45 degrees north latitude and 75 degrees north latitude. (Think about Canada, Russia, Alaska, Northern Europe and the Great Lakes.) This results from the tectonic scattering of continental landmasses and the past positions of glaciers, the researchers said. There is less land in the southern high latitudes, and the North's sizable plains were scraped by ice age glaciers, leaving behind millions of pothole lakes.

The majority (85 percent) of Earth's millions of lakes are at low altitudes, found at elevations less than 1,600 feet (500 meters) above sea level.

The study excluded the Caspian Sea, the world's largest lake, which covers an area of about 143,000 square miles (371,000 square km). Antarctica and Greenland were also left out of the study. (Antarctica has about 400 lakes buried by ice.)

The researchers plan to freely release the lake database, Seekell said. They also intend to update the count with higher-resolution data from the Landsat 8 satellite.

"Lakes are not static on the landscape, and in some parts of the world, they are disappearing quite quickly," Seekell said.

In certain regions of Russia and Alaska, higher temperatures are causing what was once permanently"frozen ground, called permafrost, to thaw, causing small lakes to dry up. Melting permafrost under a lake is like a cracked tub liner — the lakes drain out from their bottoms. Drought and overuse are also shrinking lakes. In northern China, for instance, more than 100 lakes disappeared during the 2000s from these causes.