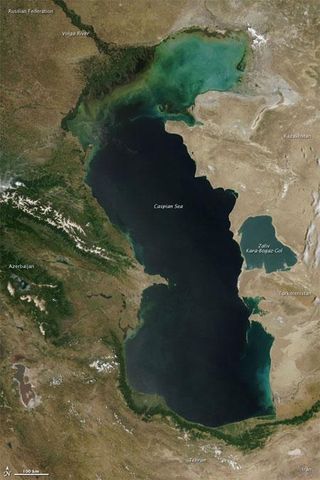 The sea covers roughly 143,200 square miles (371,000 square kilometers) and borders five countries: Iran, Russia, Kazakhstan, Turkmenistan and Azerbaijan. To the ancient Greeks and Persians, the lake's immense size suggested it was an ocean , hence its name.

NASA's Terra satellite took this image of the Caspian Sea on June 4, 2010. The color of the Caspian Sea darkens from north to south, thanks to changes in the lake's depth and perhaps sediment and other runoff. The northern part of the lake is just 16 to 20 feet (5 to 6 meters) deep. The southern end, however, plunges more than 3,300 feet (1,000 m).

Multiple rivers empty into the Caspian Sea, the Volga, which runs through central Russia, being the largest.

Lacking an outlet, the Caspian Sea loses water only by evaporation, leading to the accumulation of salt. Although a lake, the Caspian is not a freshwater lake; the water delivered by the Volga River minimizes the lake's salt content at the northern end, but the Caspian grows more saline to the south. Kara-Bogaz-Gol is a saline inlet along the lake's eastern perimeter.

Geological research indicates that the Caspian Sea was once part of a prehistoric sea known as the Paratethys, according to a NASA statement. Tectonic forces uplifting the land and a drop in sea level left the Caspian landlocked more than 5 million years ago. Climate shifts have alternately raised and lowered the lake's water levels, sometimes nearly drying it out completely.