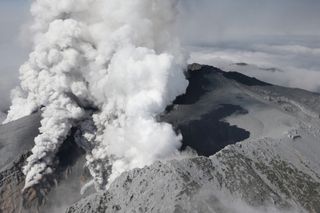 An image captured from a video of the Sept. 27 eruption at Ontake volcano in Japan.
(Image: © Asahi news)

The eruption caught the hikers by surprise this weekend. More than 250 people were exploring shrines and resorts at the 10,062-foot-high (3,067 meters) peak, the country's second-tallest volcano.

But just a month ago, in Iceland, anyone with an Internet connection knew exactly where new magma was tunneling underground before the Bardarbunga eruption began. Earthquakes, GPS and volcanic gas "sniffers" plotted out each new advance. (Magma is molten rock underground, whereas lava is molten rock flowing on the surface.) [Stunning Pictures: Japan's New Volcanic Island]

Japan has a similar high-tech network for watching its volcanoes. But Saturday's killer outburst was likely a phreatic eruption, a shallow steam explosion that is nearly impossible to predict, experts told Live Science.

"If you have a monitoring system in place, it's very unlikely that deeper activity will go unnoticed," said Philipp Ruprecht, a volcanologist at Lamont-Doherty Earth Observatory in Palisades, New York. "We have very little information or science to help the monitoring people with phreatic eruptions."

A phreatic eruption is just water and heat. Think of the inside of a volcano as a solid rock "oven" heated by magma. Earthquakes and shifting magma often jiggle and crack the rock. When a new crack opens in the oven, a blast of heat escapes, similar to opening a kitchen oven's door. If groundwater leaks into the crack, the water immediately flashes into steam from the intense heat. This violent transformation pulverizes the surrounding volcanic rock. Steam occupies much more space (or volume) than water, so it expands outward in all directions, punching a hole in the side or top of the peak.

Cracks can open without warning, Mangan said. On the other hand, frequent or more severe earthquakes at a volcano with a history of phreatic eruptions could mean it's time for more vigilant monitoring, she added.

Earlier this month, the Japan Meteorological Agency (JMA) had warned of waxing and waning volcanic tremors at Mount Ontake. Tremors are small, nearly imperceptible earthquakes. Officials did not raise the volcano's alert level from normal, or Level 1. There were no signs of rising magma, such as changes in the ground surface or gases steaming from the peak, JMA said in a Sept. 28 statement.

Phreatic eruptions sometimes come before lava erupts, like a volcano clearing its throat. The incredible bang from the 1883 Krakatau eruption in Indonesia, heard "around the world" was from a phreatic eruption. Huge lava blasts followed. And similar explosions can occur when magma meets water, which volcanologists call phreatomagmatic eruptions. Some of these magma-water blasts leave behind giant, bomb-like craters called maars.

However, no one has seen fresh lava at Mount Ontake since Saturday's eruption.

The Japan Meteorological Agency currently has alerts and warnings for 11 volcanoes, including Ontakesan, as it is called in Japan. The last phreatic eruption at Mount Ontake was in 2007. Its last volcanic blast was in 1979.

Saturday's explosion triggered a pyroclastic flow, a mix of ash and volcanic gas that billows outward at hurricane speeds and crucible-like heat. It's likely that many of the hikers trapped in the pyroclastic flow survived either because they were on the edge of the ash cloud or because it was relatively cool, though no one knows at this time. Scientists will determine the conditions once the volcano is safer to approach.

"It's a hazard that you don't run away from, because they're just moving too fast," Mangan said. [Video – Crews Recover Bodies from Japan Volcanic Eruption]

About 200 people are thought to have survived Saturday's deadly blast by scrambling down the mountain through the choking ash clouds or sheltering in huts and lodges. Their harrowing tales include eerie darkness, rocks raining from the sky and struggling to breath in the thick ash. A phreatic explosion tends to produce very fine ash particles, Ruprecht said. The ash covered 2 miles (3 km) of the mountain's south slope.

"It's like being in a sauna while you're being blasted by a dust storm. It's hard to imagine how they were able to breathe," Ruprecht said.

Volcanic gases such as sulfur dioxide can also suffocate those trapped on the mountain, and rocks flung at high-speed can crush people and cause fatal head wounds. A phreatic explosion killed five people at Mayon volcano in the Philippines last year.