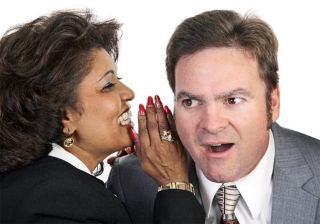 Participants relied on gossip about others, even when it contradicted their own direct observations.
(Image: © Dreamstime.com)

My niece and I have a favorite pastime. We buy a stack of the trashiest celebrity gossip magazines, sprawl out on the floor with some chocolate close at hand and discuss each photograph, headline and story. We have very strong opinions about these stars, people we don’t even know, and never will. Why is this such a satisfying way to spend a Friday night? Because we might just be evolutionarily designed to judge and talk about others. There are a million ways to categorize conversation among people. We greet each other and say goodbye, explain, inform, lie, tell secrets, comfort with words and tattle tale. But mostly, we like to talk about other people. Stand around the office and listen to any two people who happen to be within shouting distance of each other. Even if they start out talking about the weather, they'll end up talking about someone else. Better than grooming Such casual chat is just that until it turns malicious, unkind and secretive, a special packet of information to be passed from one person to the next with the intent to harm. And often with no basis in fact. But primatologist Robin Dunbar of the Institute of Cognitive and Evolutionary Anthropology, University of Oxford, claims that gossip is not always bad. Dunbar says, instead, that gossip has been selected by evolution as a way to hold large human groups together. Many other primates, such as baboons, live in big groups and they use grooming as a social tool to make, keep or break social connections. But during our evolutionary history, Dunbar explains, human groups became way too large and no one had the time to groom everyone they needed. Gossip, or talk about each other, then replaced grooming as a social glue among humans. Teach your kids! Gossiping might be part of human nature, but we are not born gossiping. Children learn the art of conversation through a lens of socialization — speak respectfully to adults, don't swear in public, use correct grammar, be careful what you say. Children also quickly understand that language is there for the using, and that it's pretty easy, natural really, to manipulate others with words. "I didn’t do it, she did," says the 4-year-old fingering someone outside the room as the culprit. "Hey Mom, you are so beautiful, can I have a new bike?" works at least once. And as any parent knows, even tiny children with only a few words are masters at getting what they want by verbal begging. It's no wonder that these kids turn into gossiping adults able to manipulate conversation, and people, to their own advantage. At its most innocent, talking of others is simply sharing information — "See that guy over there? He's my friend's brother. He's nice." But that information takes on another tone when it is spun by the speaker into a social poison arrow — "See that guy over there? I heard he's my friend's mean brother." And then the statement rolls along, gathering negative social moss as it goes, sometimes flattening the subject of the gossip in its path. No baboon's grooming ever did that.