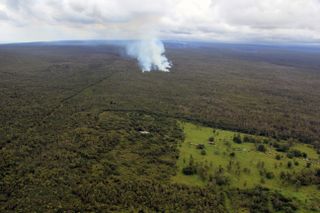 Lava from Kilauea volcano is five to seven days away from the Kaohe Homesteads neighborhood.
(Image: © Hawaii Volcano Observatory)

A partial evacuation is already underway in Hawaii's Kaohe Homesteads neighborhood, where slow-moving lava from Kilauea volcano is about a week away from the cluster of homes and ranches.

Residents have not been asked to leave, but people are moving animals out of the area, according to news reports. The lava is creeping through a forest reserve, and smoke from the burning trees and brush can create harmful levels of pollution depending on wind direction. [Watch: Hawaii Lava Flow Threatens Homes]

The Hawaii Volcano Observatory (HVO) is closely monitoring the June 27th flow, named for the day it spewed from a vent in Pu'O O'O crater. The lava has advanced 8.3 miles (13.4 kilometers) since June 27, the HVO said.

Pu'O O'O crater is part of Kilauea's East Rift Zone. Vents and fissures in the rift zone have been oozing lava non-stop since Jan. 3, 1983. The long-lasting eruption has destroyed more than 200 structures, including the Hawai`i Volcanoes National Park visitor center, the Royal Gardens subdivision and many homes and buildings in the town of Kalapana.

For the last few years, lava from Pu'O O'O crater mostly streamed south toward the ocean. But the June 27th flow erupted from a vent on the northeast flank of the crater. (Lava flows also traveled northeast of Pu'O O'O crater between 1983 and 1986.)

The new lava headed northeast into rough ground rumpled by deep cracks and depressions, and then disappeared underground for a few weeks into one of these cracks. On Sept. 2, lava welled up out of the crack and surfaced again, less than a mile (1.3 km) from the closest homes in Kaohe Homesteads.

Civil defense officials have held four meetings with community members to discuss possible threats from the oncoming lava flow. Access to neighborhood roads has been restricted to residents, and a state of emergency was declared for the county.