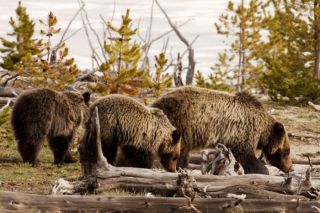 John Weaver, senior conservation scientist for the Wildlife Conservation Society, has conducted field research in many wild areas across western North America over the past 45 years. This article was originally published on NationalGeographic.com. He contributed this article to Live Science's Expert Voices: Op-Ed & Insights.

The grizzly bear turned quickly, and I stopped.

Her hair shone silver in the sun as she turned back to her cub. They were savoring sweet huckleberries sprouted in soils enriched by the ashes of a wildfire half a century ago. A necklace of beaver ponds graced the valley below, supporting a diverse community of plants and animals while storing precious water vital to human communities downstream. I felt in the presence of something wild in a landscape that glowed with natural integrity of its living things.

I was young and on a high peak in the Bob Marshall Wilderness of Montana, not far from Glacier National Park. It’s one of many wilderness areas across America protected by the Wilderness Act, enacted 50 years ago today by Congress with broad bi-partisan support. In terms of America’s best ideas, wilderness ranks alongside National Parks.

Recently, some neo-conservationists have argued that the Wilderness Act is facing a mid-life crisis, that somehow the notion of Wilderness is an anachronism in the ‘Anthropocene’ era of human domination of the planet. They argue that we should focus on domesticating landscapes to serve economic growth of the human juggernaut rather than protecting remaining wild lands and preventing human-caused extinction of species. Other conservationists – myself included – disagree.

The debate begs the question: What is wilderness? The Wilderness Act states that a “wilderness, in contrast with those areas where man and his own works dominate the landscape, is hereby recognized as an area where the earth and its community of life are untrammeled by man.” The word “untrammeled” denoted places “not subjected to human controls and manipulations that hamper the free play of natural forces.” It was predicated on the humble notion that we humans should respect the wild, defined as self-willed and autonomous.

Over the past 50 years, citizens all across America and Congressional leaders have worked hard to protect the splendid diversity and beauty of our wild lands. And there is much to celebrate! Today, there are 758 separate wilderness areas spread across 44 states totaling about 110 million acres (only 5 percent of America). This meager estate of wild land comprises a remarkable legacy and great gift.

Now many neo-conservationists believe we should intervene as technocratic managers to “help Nature” by developing hybrid tree species to withstand hotter temperatures and carting animals from habitat degraded by climate change to new sites. Yet where is the evidence that more of the same “we-humans-know-best” kind of thinking that led to extinction of species, massive habitat destruction, hundreds of non-native species, and now global warming will provide more resiliency? An environment engineered by humans sounds depressingly dull and astonishingly arrogant to many of us.

Rather than divert our efforts on desperate treatment of symptoms, we should take another, more fundamental option going forward. Nature has been innovating with considerable talent for millions of years with repeated and marvelous success, producing species and ecosystems that are diverse, complex, and beautiful.

We should keep ecological options open by protecting and connecting large natural areas that contain a variety of landscapes. Placing ecologically-diverse roadless areas in legislated Wilderness comprises one investment in a larger portfolio of prudent responses to climate change. The Wilderness Act already provides for the rare exception where intervention seems absolutely necessary (e.g., restoration of vanquished species).

Remarkably, there are still 58.5 million acres on National Forests and another 12.8 million acres on Bureau of Land Management lands across America that are roadless yet not protected as Wilderness. According to the US Forest Service, these lands provide critical habitat for more than 1,600 endangered, threatened, or sensitive species of plants and animals. Many of these roadless areas are adjacent to existing Wildernesses and National Parks. For example, there are nearly a half-million acres of roadless areas on the Flathead National Forest next to Glacier National Park.

Protecting these wild places will help secure habitat for vulnerable wildlife, safeguard their genetic integrity, enhance connectivity, and provide options for movement in response to changing climate – all key to resiliency in a changing world. Wilderness designation will also help conserve vital sources of water that will become ever more precious in a warmer future. Finally, such protected areas will serve as valuable benchmarks for assessing our effect on developed lands.

No, it’s not the Wilderness Act that is in crisis but rather the natural world – the grand community of which we humans are the most influential. Over the next fifty years, the world will become ever more crowded, industrialized, and fragmented. We have neither the scientific understanding nor the moral authority to re-assemble ecosystems. We should respect and honor that dynamic process tested through the ages that gave birth to all life by protecting the last of the wild.