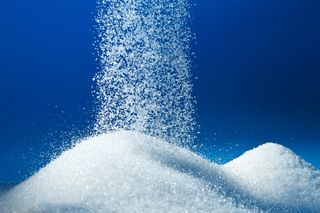 It might seem strange to use an ingredient found in cupcakes and cookies as an energy source, but most living cells break down sugar to produce energy. And, interestingly, the energy density of sugar is significantly higher than that of current lithium-ion batteries.

Recently, my colleagues and I successfully demonstrated the concept of a sugar biobattery that can completely convert the chemical energy in sugar substrates into electricity.

Working under a Small Business Innovation Research (SBIR) grant from the U.S. National Science Foundation, we reported the findings in the January 2014 issue of Nature Communications.

This breakthrough sugar-powered biobattery can achieve an energy-storage density of about 596 ampere-hours per kilogram (A-h/kg) — an order of magnitude higher than the 42 A-h/kg energy density of a typical lithium-ion battery. A sugar biobattery with such a high energy density could last at least ten times longer than existing lithium-ion batteries of the same weight. [Electric Bacteria Could Be Used for Bio-Battery ]

This nature-inspired biobattery is a type of enzymatic fuel cell (EFC) — an electrobiochemical device that converts chemical energy from fuels such as starch and glycogen into electricity. While EFCs operate under the same general principles as traditional fuel cells, they use enzymes instead of noble-metal catalysts to oxidize their fuel. Enzymes allow for the use of more-complex fuels (such as glucose), and these more-complex fuels are what give EFCs their superior energy density.

As my colleague Zhiguang Zhu, a senior scientist at Cell-Free BioInnovations, has said, our team is not the first to propose using sugar as the fuel  in the biobattery. However, we are first to demonstrate the complete oxidation of the biobattery's sugar so we achieve a near-theoretical energy conversion yield that no one else has reported.

For our battery, we constructed a synthetic catabolic pathway (a series of metabolic reactions that break down complex organic molecules) containing 13 enzymes to completely oxidize the glucose units of maltodextrin, yielding nearly 24 electrons per glucose molecule.

We put specific thermostable enzymes into one vessel to constitute a synthetic enzymatic pathway that can perform a cascade of biological reactions to completely "burn" the sugar, converting it into carbon dioxide, water and electricity.

Unlike natural catabolic pathways for the oxidation of glucose in cells, the designed synthetic pathway does not require costly and unstable cofactors, such as adenosine triphosphate (ATP, critical for energy processes in human cells), coenzyme A, or a cellular membrane.

Instead, we used two redox enzymes that generate reduced nicotinamide adenine dinucleotide (NADH) from sugar metabolites. NADH, a reducing agent involved in redox reactions, is a natural electron mediator that carries electrons from one molecule to another. We also used ten other enzymes responsible for sustaining metabolic cycles and an additional enzyme that transfers electrons from NADH to the system's electrode. This new synthetic pathway enables the biobattery to extract the entire theoretical number of electrons per glucose unit and thereby use all the chemical energy in the sugar. This is a significant breakthrough.

In addition to its superior energy density, the sugar biobattery is also less costly than the lithium-ion battery, refillable, environmentally friendly, and nonflammable. While we continue to work on extending the lifetime, increasing the power density, and reducing the cost of electrode materials for such a battery, we hope that the rapidly growing appetite for powering portable electronic devices could well be met with this energy-dense sugar biobattery in the future.

This technology was funded through the NSF Small Business Innovation Research Program. This article was prepared by the National Science Foundation in partnership with CEP. Follow all of the Expert Voices issues and debates — and become part of the discussion — on Facebook, Twitter and Google +. The views expressed are those of the author and do not necessarily reflect the views of the publisher. This version of the article was originally published on Live Science.