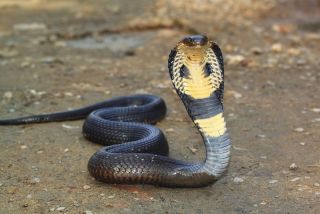 Venomous snakes are scary when they're alive, but there's also reason to fear these fanged creatures after they're dead, a recent news report suggests.

The tale of a chef in China who was preparing a rare delicacy known as cobra soup and was fatally bitten by the decapitated head of one of the snakes he had chopped up for this unusual stew was reported last week, in the U.K. Daily Mirror.

While this story might sound too weird to be true, scientific evidence suggests it is entirely plausible.

"Snakes in general are well known for retaining reflexes after death," said Steven Beaupré, a biology professor at the University of Arkansas. Many ectothermic, or cold-blooded, vertebrae— including species of reptiles and amphibians— share this quality, he said. [7 Shocking Snake Stories]

In fact, there have been previous reports, including in the U.S., of people being bitten by the severed heads of snakes.

For venomous snakes, such as cobras and rattlesnakes, biting is one of the reflexes that can be activated in the brain even hours after the animal dies, Beaupré told Live Science.

The bite reflex is stronger in venomous snakes than it is in some other carnivores because these snakes use their bite differently than other meat-eaters, Beaupré said. Unlike a tiger, for instance, which kills prey by sinking its teeth into an animal's flesh and holding on, snakes aim to deliver just one, extremely quick bite and then move away from their prey before getting trampled.

The rapid-fire attack can occur in less than a second, Beaupré said. In fact, rattlesnakes have been known to envenomate (inject venom into) prey in less than two-tenths of a second, he said.

It's likely that the cobra-chopping chef who reportedly died last week in China was a victim of the snake's quick reflexes, Beaupré said.

Unfortunately for the Chinese chef, a cobra's bite reflex can be triggered even hours after the animal dies, Beaupré said. The man reportedly picked up the snake's head just 20 minutes after he had chopped it off.

"Just because the animals has been decapitated, that doesn't mean the nerves have stopped functioning," Beaupré said. The bodies of snakes have been known to continue rising off the ground in a menacing pose, and even to strike out against a perceived threat, after they've suffered a beheading, he added.

These eerie postmortem movements are fueled by the ions, or electrically charged particles, which remain in the nerve cells of a snake for several house after it dies, Beaupré said. When the nerve of a newly dead snake is stimulated, the channels in the nerve will open up, allowing ions to pass through. This creates an electrical impulse that enables the muscle to carry out a reflexive action, like a bite.

"The bite and envenomation reflex is triggered by some kind of information that comes into the mouth cavity," Beaupré said. "My guess is that this guy put his hand in the snake's mouth after he cut it off. He probably put a finger in there or something and it triggered this response."

And the Chinese chef is far from the first person to ever have been bitten by a dead snake. In January 2014, a man in Australia was bitten by a venomous red-bellied black snake 45 minutes after he had chopped the creature in half with a shovel, according to the Daily Telegraph. The man survived the incident, but reportedly spent two days in the intensive care unit.

In 2007, a man in Washington state decapitated a rattlesnake with a shovel before bending down to clean up the remains, according to a report by the Associated Press. The dead snake bit him in the hand, but the man survived the incident.