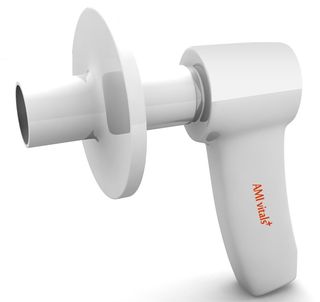 Soon, doctors could be diagnosing patients using handheld devices like this one developed by Team Danvantri for the Qualcomm Tricorder XPRIZE contest.
(Image: © Danvantri)

Teams around the world are competing to build a medical device that could diagnose diseases and monitor people's health — just like the fictional "tricorder" featured in the sci-fi series "Star Trek."

The X Prize Foundation is hosting a $10 million competition to develop a mobile health-monitoring device that can diagnose and interpret a set of 15 medical conditions and monitor five vital signs. X Prize announced the 10 finalist teams of the Qualcomm Tricorder X Prize contest today (Aug. 27).

But unlike the "Star Trek" tricorder, these devices may not be able to diagnose all ailments with the swipe of a wand. Still, they nevertheless deserve some sci-fi cred.

One finalist team, Toronto-based CloudDX, is developing a necklace and cuff that can measure pulse, echocardiogram (ECG), blood oxygenation, temperature and other vital signs. The information can be sent instantly to a tablet device or stored online in the cloud.

Another finalist, Cambridge, Massachusetts-based DMI, is a partnership that includes the DNA Medicine Institute, NASA, the National Institutes of Health and the Bill and Melinda Gates Foundation. The team has developed a universal blood sensor, which they tested on a series of parabolic, zero-gravity flights.

"We want consumers to take a more proactive approach to managing their health, and having convenient access to real-time medical data will do just that," Grant Campany, senior director of the Qualcomm Tricorder X Prize, said in a statement. "As we move to the final stage of this process, we are one step closer to putting health care in the palm of your hand."

In the competition's qualifying round, the teams submitted devices that were judged based on safety, user experience and the device's performance on a health assessment evaluation. A panel of medical industry and digital health experts judged the submissions of 21 teams from nine countries, narrowing the entries down to 10 finalists.

The technologies developed for the tricorder competition could have an "exponential, global impact," Rick Valencia, senior vice president and general manager of Qualcomm Life Inc., a subsidiary of the semiconductor company Qualcomm, said in a statement. The devices will be used to not only diagnose diseases, Valencia said, but also in continuous health monitoring and disease prevention.

During the final round of competition, scheduled to take place in mid- to late 2015, teams will take part in diagnostic experience evaluations and consumer testing. The judges will select the winning team in early 2016, according to the competition's organizers.

The U.S. Food and Drug Administration (FDA) has been advising the teams on the regulatory process for medical devices, in the event the teams decide to apply for FDA approval after the competition.

Previous X Prize challenges include the 1996-2004 Ansari X Prize to build private spaceships for suborbital flight and the 2010-2011 Wendy Schmidt Oil Cleanup X Challenge that was designed to speed up the clean-up of oil spills on the ocean surface.

Other active competitions include the 2007 Google Lunar X Prize, in which teams are competing to design technologies to launch, land and operate a rover on the moon and the 2013 Wendy Schmidt Ocean Health X Prize to improve understanding of ocean acidification.