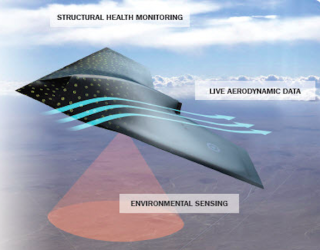 The newest technology for military planes is surprisingly touchy-feely. Applied to the outside of an aircraft, the new "smart skin" lets planes "feel" the world around them through thousands of tiny sensors.

The new tech could help aircraft monitor their own health and automatically report potential problems to engineers and maintenance crews, according to researchers with British defense company BAE Systems, who are developing the futuristic skin.

Made up of a network of thousands of sensors, the smart coating performs a similar function to human skin, allowing planes to sense changes in temperature, wind speed, physical strain and movement. While researchers are still working out the specifics of how to use the technology, they believe it could one day be applied to a plane or other vehicle much like a coat of paint. [5 Crazy Technologies That Are Revolutionizing Biotech]

Each sensor is about the size of a grain of sand, according to Lydia Hyde, a senior research scientist with BAE systems. These tiny sensors represent an improvement over other sensing technologies, which are much bulkier and less adept at gathering information from a variety of points across an aircraft's surface.

"The idea is to make [aircraft] platforms 'feel' using a skin of sensors in the same way humans or animals do," Hyde said in a video posted on the company's website. These smart skinscould also be applied to other vehicles, including ships and cars, she said.

The data collected by the smart skin can be used to notify ground crews and engineers about damage or stress to the aircraft, reducing the need for routine maintenance checks, according to Hyde.

And the sensors could also help provide a more comfortable experience for pilots and passengers, by detecting airflow across the surface of the plane and adjusting for turbulent conditions, Hyde said.

"The more sensing we can put on [an aircraft] and the more we can understand how it's flying, or how the plane's doing, the better we can make the flight," Hyde said. Knowing about the health of a plane every step of the way could also save aerospace companies a lot of money by detecting potential problems before they become very expensive to fix, she said.

This sensor technology could one day be incorporated into a broad range of commercial products, according to Hyde. A car equipped with the skin could give useful feedback about how to improve fuel efficiency, she said. Or, Hyde noted that a carpet coated in smart skin could let you know when it's time to get out the vacuum.