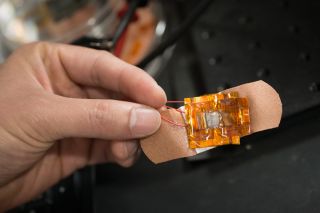 A whisper-thin new pressure sensor could be a step toward creating artificial skin that is able to actually feel.

A sense of touch is important for developing robots that can navigate the world, and could improve prosthetic limbs for amputees. But artificial human skin is remarkably difficult to engineer, given that skin is sensitive to the lightest of touches, flexible and uses little energy.

A new sensor may fit that bill, according to a paper published today (May 14) in the journal Nature Communications. The sensor is more sensitive to pressure than human skin, said study researcher Zhenan Bao, a professor of chemical engineering at Stanford University. [Bionic Humans: Top 10 Technologies]

"If you use your finger to touch your skin or hand, the pressure applied is in the kilopascal range," Bao told LiveScience, referring to a unit of pressure. "Our sensor can detect pressure that is a few hundred times less than that gentle touch."

Bao and her colleagues have been working on electronics inspired by human skin for years. In 2010, they announced the development of an extra-sensitive pressure sensor made with ultrathin rubber. But that device didn't have a flexible transistor, which is the semiconductor that transmits the signal from the sensor.

The new device is a transistor made of a flexible polymer semiconductor, Bao said.

"If we have a layer of rubber, and we apply pressure onto the rubber, the rubber will deform," she said. "And when it deforms, it will change the amount of charge it can store. These charges will impact the current flow into the transistor."

The sensor works even when curved, as around a body part. Bao and her colleagues tested their device on a man's wrist, and found they could take his pulse with more far more sensitivity than by laying fingers on his artery.

Fingers held to a pulse point can only detect the strongest push of blood through a vessel. The flexible sensor can also detect a second, weaker wave of blood being bounced back from the extremities, and a third wave that can provide a measurement of the stiffness of the artery. Stiff arteries can be a sign of damage from diabetes, or cholesterol buildup.

The next step for Bao and her co-researchers is to make the device wireless, and thus less cumbersome for continuous medical monitoring. Ultimately, she said, the goal is to enter sci-fi territory: building artificial skin that can sense and feel.

"To actually make artificial skin, we still need to be able to connect the sensors with neurosystems, so that the sensor signal can be transmitted to the human brain," Bao said. "That will be a big challenge."

Nevertheless, she said, the team is making progress. In 2011, they developed a stretchable touch sensor, and in 2012, they created a version that could self-heal from scratches.

"My students love 'Star Trek' and 'Iron Man,'" Bao said. "Those science fiction movies give them inspiration, and make us more innovative and creative."