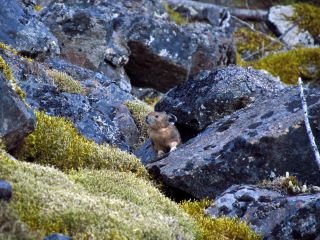 A pika in the Columbia River Gorge.
(Image: © Johanna Varner )

SACRAMENTO, Calif. — Johanna Varner thought a devastating forest fire meant the end of her pika research on Oregon's Mount Hood. Instead, she discovered that the pint-size pikas survived the fire, providing new insight into their resiliency to environmental change.

Varner is studying pikas in Oregon's Columbia River Gorge, where this rabbit relative munches on moss instead of grass and flowers. She compares these unusual, low-elevation pikas with a more typical group living at high elevation on Mount Hood. In 2011, the Dollar Lake fire burned more than 6,000 acres (about 2,400 hectares) of the Mount Hood National Forest. Varner, a doctoral student in biology at the University of Utah in Salt Lake City, was unaware of the fire until she returned to her field site on Pinnacle Ridge in 2012 and discovered it was destroyed.

"I burst into tears," Varner said. "It was just so heartbreaking. I had watched them construct their little food caches, and the [caches] were just a pile of ashes."

Pikas live in crevices on relatively bare, rocky slopes called talus and gather piles of plants to eat during the long alpine winters. The mammal's body is shaped like a ball, to help conserve heat. [Furry Bundles: The World's 5 Smallest Mammals]

Because of their temperature sensitivity, pikas are bellwethers of climate change. Studies have documented that pikas in Nevada and eastern Oregon have already moved to higher-elevation homes as temperatures warm. Other mountain populations have vanished, frozen out because less winter snow means colder winter temperatures — snow insulates the pika's homes.

The trees and shrubs surrounding the Pinnacle Ridge talus slope were 100 percent burned, meaning a high-temperature fire and a severe burn, Varner said. She assumed all of the pikas were dead.

However, the year before, Varner had cached temperature sensors in the talus boulders. These sensors provided the first signs of hope. "I expected them to be little piles of melted plastic, but they were still functional," Varner said.

When Varner pored over the temperature data, she couldn't tell which day the fire burned through the area. According to satellite data and the U.S. Forest Service, the Dollar Lake fire hit the slope between Sept. 11 and Sept. 14, Varner said. The surface temperature of the rocks rose slightly during the fire, but inside the crevices, where pikas live, the heat never exceeded temperatures recorded in the summer days before the fire, she reported Thursday (Aug. 14) here at the Ecological Society of America's annual meeting.

"These data suggest the pika could have survived the fire," Varner said. "If I ever get stuck in a wildfire, I can tell you where I'm going to hide."

Small mammals like pikas can't flee a forest fire like deer, and Varner's research is the first evidence that sheltering in place helps the species endure a fire. Even if some pikas perish, enough survive that they can recolonize areas wiped out by the flames.

Forest fires are predicted to grow more frequent in the West in the next 50 years, especially in areas where pikas live. While the Mount Hood pikas were a healthy bunch, Varner wonders whether a pika population already stressed by climate change would bounce back as quickly.

"The take-home message is that pikas may be more flexible in their habitat than we thought," Varner told Live Science. "They make the most of whatever is there. But in places where they are stressed, they might not respond the same way.

In the years since the fire, Varner has followed up to see how the loss of tree canopy affects the temperature of the talus slopes, and she has watched as pikas repopulate the research sites. Varner is also overseeing citizen science projects to keep a close eye on the Oregon pika population.

The most severely burned sites still have fewer pikas than lightly burned talus does. There are early hints that a vegetation threshold may exist, Varner said, meaning that pikas need a certain number of plants to maintain a population.

"I thought my thesis had gone up in flames, but it has yielded new insights," Varner said.