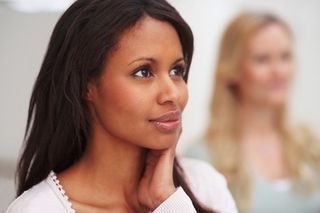 Freelance writer Marlene Cimons is a former Washington reporter for the Los Angeles Times who specializes in science and medicine. She writes regularly for the National Science Foundation, Climate Nexus, Microbe Magazine and the Washington Post Health Section, from which this article is adapted, and she is an adjunct professor of journalism at the University of Maryland, College Park. Cimons contributed this article to Live Science's Expert Voices: Op-Ed & Insights.

Betty Jordan always regarded melanoma, the deadliest form of skin cancer, as a white person's disease. "Whenever I heard the word, my mind would automatically think: 'Caucasian,''' she said. "It was something I never worried about.''

Dark-skinned people produce more melanin — the pigment that gives skin its color — than Caucasians. Melanin helps block damaging ultraviolet rays from the sun and from artificial light sources such as tanning beds, giving people of color greater protection against skin cancer than whites. But they still are susceptible. So Jordan was shocked five years ago to learn that the quarter-size dark spot on her left foot was acral lentiginous melanoma (ALM), an aggressive cancer that disproportionately afflicts African Americans and other dark-skinned people. [As Cancer Deaths Fall, Malignant-Melanoma Rates Climb (Op-Ed )]

"I never paid any attention to it until a friend urged me to see a doctor,'' she said. "The area was hard to see, and it never occurred to me to get serious about it.''

Fortunately, the cancer was caught early and removed. The prognosis is excellent for Jordan, 69, a retired Metro computer-network engineer who lives in Temple Hills, Md. But this is not typically the case for dark-skinned people who develop ALM or other skin cancers . Because people with dark skin often assume they are not at risk, their cancers tend to be diagnosed at a more advanced stage, and patients often face a bleaker outcome.

"It's true that the vast majority of melanomas occur in fair-skinned people, but it's important to know that dark-skinned people can get skin cancer, too,'' said Maral Skelsey, a surgeon and skin-cancer specialist who heads the Georgetown University Medical Center's dermatologic surgery center. "They often are dismissed by their general physicians in terms of risk. I hear it so often: 'No one told me I could get skin cancer.'''

Melanoma rates among all Americans have been increasing for the past 30 years, probably due to failure to take sufficient protective measures against ultraviolet-ray exposure and to increasing use of tanning booths. Melanoma accounts for fewer than 2 percent of skin cancer cases, but it kills more frequently than the others. In 2014, doctors will diagnose an estimated 76,100 new cases of melanoma, causing about 9,710 deaths, according to the American Cancer Society.

To be sure, melanoma is many times more common in whites (1 in 50) than in African Americans (1 in 1,000) or Hispanics (1 in 200). But the danger for affected people of color is greater: The five-year survival rate for African Americans is 73 percent, compared with 91 percent for Caucasians, according to the American Academy of Dermatology.

ALM, while rare overall, primarily strikes people of color — African Americans, Asians, Pacific Islanders and Hispanics — and it can be lethal. The disease is most often found on the palms, nail beds and soles of the feet. These are areas of the body that have less pigment and receive less exposure to the sun; they also are locations people are most likely to ignore. Reggae musician Bob Marley died in 1981 at age 36 from ALM, initially thought to have been a soccer bruise under his toenail.

"This is a deadly form of skin cancer which disproportionately afflicts blacks and can behave more aggressively,'' said Suraj Venna, director of the Melanoma and Cutaneous Oncology Center in the Washington Cancer Institute at MedStar Washington Hospital Center. "The way to combat this is to educate people from these communities, as well as their health-care providers.''

ALM can arise in skin that appears to be normal, and it can develop within a mole. It often starts as a slowly enlarging flat patch of discolored skin and is sometimes mistaken for a stain. At first, the malignant cells are found within the outermost layers of the skin, but the cancer later can become invasive. The thicker the melanoma, the more likely it is to metastasize and become life-threatening.

Experts don't know why ALM overwhelmingly affects people of color or why it usually shows up in less-pigmented areas of their bodies.

"There likely is some interplay in biology, ethnicity and the environment," Venna said. "Maybe there is some protein or gene we are not seeing in the white population. Pigment does protect them, which probably explains why they don't have the same incidence of melanoma on their backs or legs. . . . The field definitely needs more studies on genetics and ethnic variation, especially to explain the poorer outcomes in African Americans.”

Dermatology experts stress that dark-skinned people should never be complacent about their risk of developing skin cancer. These experts recommend regular full-body examinations for people with dark skin, just as for fair-skinned individuals, and urge them to be especially vigilant about routinely checking locations where ALM typically develops.

"Your physician shouldn't dismiss you just because you are black if you have any new or changing skin lesions on your body, especially nail changes,'' Skelsey said. "If somebody has a wide, dark streak under a nail or on the edge of the skin where it meets the nail, it is very important to have it evaluated, especially if it is something that persists and is wide and solitary. The only way to know for sure is to biopsy the area.''

Washington podiatrist Sheldon Laps recalls the African American patient who came to him 10 years ago with a mass on the end of one of her big toes that had started as a coffee-colored stain. Doctors had been treating her with antibiotics for 18 months, mistakenly assuming she had an infection.

But it wouldn't go away, so they sent her to Laps for further evaluation. He thought it was a bone tumor and immediately took an X-ray. But the bone was normal. He then performed a biopsy. "It was acral lentiginous melanoma,'' he said. "I was flabbergasted when I got the report. I had never seen a case of that before.''

An orthopedic oncologist amputated the toe, and initial scans of the patient's liver, spleen, bones and lungs were clear. But the tumor had spread, and she died several years later. "I have to wonder what might have happened if she had not been misdiagnosed for a year and a half,'' Laps said. "She might not only still have her toe, but still have her life.''

The only effective treatment for ALM is surgical removal of the cancer, which makes early detection especially important. A special surgical technique known as Mohs, named after Frederic E. Mohs, the physician who developed it, often can spare fingers and toes from amputation.

The procedure involves surgically removing skin cancer layer by layer and examining the tissue under a microscope until there are clear margins — that is, healthy, cancer-free tissue around the site of the tumor. Surgeons who practice the Mohs procedure must undergo additional training, and not all skin-cancer surgeons perform it.

"It's highly effective, and you don't have to take drastic measures that are unnecessary,'' such as amputation, said Ali Hendi, a Chevy Chase skin cancer specialist who has been trained in Mohs surgery. "It is a tissue-conserving surgery to remove only the cancer and nothing more. It's not available in many areas, so people are not always aware of it as an option.''

(For more information or to find a Mohs-trained surgeon, contact the American College of Mohs Surgery.)

As for ALM survivor Betty Jordan, she undergoes a full-body examination every six months and she frequently examines her nails, palms and the soles of her feet. "This was something I never thought about before,'' she said. "But I pay close attention now.''