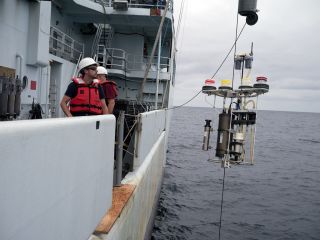 A McLane pump being deployed from R/V Thompson during the West Pacific GEOTRACES cruise in 2013 helped researchers gather small particles of organic matter to which mercury attaches and sinks to intermediate depths (100 to 1,000 meters) in the ocean.
(Image: © Brett Longworth, Woods Hole Oceanographic Institution)

After sailing the seas in ships that plumbed the oceans' depths for mercury pollution, an international team of scientists has announced a breakthrough in understanding how the toxic metal disperses in the ocean.

This is the first time researchers have assembled a global picture of mercury's movements. The team traced the metal from shallow waters where fish live, down to the ocean's deep, cold bottom currents, where mercury may be stored for centuries. These deep currents keep the planet from overheating by tucking away excess carbon dioxide, which is a greenhouse gas. Now the currents earn another nod for gobbling up mercury.

"We are sticking mercury in the ocean's storage closet," said lead study author Carl Lamborg, a research scientist at the Woods Hole Oceanographic Institution in Woods Hole, Massachusetts. "And if this wasn't happening, there would be twice as much mercury in the ocean today as there is now."

Most ocean mercury is shallow

The results of the massive study reveal that mercury concentrates at shallow depths, in the ocean's upper 100 meters (328 feet). Since humans started releasing mercury into the environment — via gold mining and coal-fired power plants, for example — mercury levels in these depths have risen by 250 percent compared with prehuman concentrations. The findings were published today (Aug. 6) in the journal Nature. [In Photos: Trash Litters the Deep Ocean Floor]

However, the overall estimate of mercury levels in the world's oceans is lower than earlier studies had found, the researchers report. Based on water sampled from every ocean basin, the team suggests that the average mercury concentration in the ocean's upper 328 feet is 0.12 parts per trillion (0.6 picomoles). This means that for every liter of water, less than a full molecule is mercury.

"In a weird way, I'm a little bit optimistic about this," Lamborg told Live Science. "The total amount of mercury in the ocean is maybe not as big as we feared it was," he said. "If we take some steps to reduce mercury emissions, we may have a chance of seeing mercury concentrations in the ocean go down."

The problem with mercury is that even at such vanishingly small amounts, the metal can build up to toxic levels in animals over time. Mercury increases in concentration with each step up the food chain, and is found at its highest levels in long-lived, large predators such as swordfish and tuna. According to the U.S. Environmental Protection Agency, such fish have mercury levels in the parts per million, or one million million times more than the ocean's background mercury levels. [See Photos of the Largest Fish on Earth]

As an inorganic metal, mercury is a neurotoxin that damages the nervous system and can cause birth defects. In the environment, mercury can bind with organic molecules to form methyl mercury, which is even more toxic to animals. (This process is called mercury methylation.)

"This is a very interesting and important paper," said Joel Blum, an environmental scientist at the University of Michigan in Ann Arbor, who was not involved in the study. Blum praised the study for providing a new way of tracing mercury in the ocean. "This information, when combined with a better knowledge of mercury methylation in the oceans, will eventually allow estimates to be made about how mercury contents of seafood may change in the future," he said.

Scientists expect the ocean's mercury levels to rise in the next few decades because of human activity, such as new power plants. "The pace at which we're putting mercury into the environment is accelerating," Lamborg said.

The ocean's capacity for mercury storage can only mitigate so much of the world's annual mercury emissions, the researchers predict. [Video: Humans Hit the Oceans Hard]

According to the study, the North Atlantic's deep water has higher mercury levels than anywhere else in the deep ocean, because it is the youngest "deep water" on the planet.

Giant ocean currents circle the Earth like a conveyor belt. In the Atlantic Ocean, the warm Gulf Stream sinks in the North Atlantic when it reaches polar latitudes, then flows south of the equator along the ocean floor, before turning around near Antarctica and branching off into the Indian and Pacific oceans.

"The mercury is slowly penetrating into the ocean," Lamborg said. Some parts of the deep ocean are still untouched by mercury pollution.

Hitching a ride on plankton

The worldwide sampling campaign suggests a reason for the differences in concentrations as mercury sinks deeper in the ocean. The metal mimics carbon.

The ocean is the planet's carbon cache, hoarding 25 percent of the carbon dioxide pumped into the atmosphere. One of the big carbon transports is ocean phytoplankton. These simple life forms live on the sunlight-dappled sea surface, where they take carbon dioxide from the atmosphere to build their shells and for photosynthesis. When the phytoplankton excrete waste as well as when they die, the remains (and waste) sink to the ocean floor, trapping the carbon they removed from the sky.

It turns out that mercury clings to these microscopic life forms, traveling the same pathway as carbon and another important nutrient called phosphate. The team followed mercury's path from the surface down to the ocean's depths, and found that in the deep layers, the metal could be stored in the deep ocean for centuries on sluggish, cold currents.

About 1,000 years from now, mercury pollution from the coal-fired Industrial Age might surface in the North Pacific, a reminder of humanity's excesses.

Editor's note: This article was updated Aug. 6 to correct the conversion between parts per trillion and picomoles.