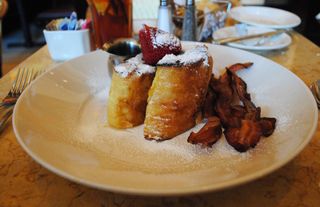 French toast served with butter syrup and bacon, a platter of fried seafood and hush puppies, and a cheesecake made with Reese’s peanut butter cups and fudge are among the meals singled out this year for their shockingly unhealthy nutrition content in a new report from a nonprofit watchdog group.

Nine meals from American chain restaurants were selected for the 2014 Xtreme Eating Awards, a list released yearly by the Center for Science in the Public Interest as a way to highlight meals that are very high in calories, saturated fat, sodium and sugar.

Nearly all the meals on this year's list have at least 2,000 calories, and a few top 3,000 calories. "You could take half home and still overeat," the CSPI says.

Three of the meals on the list are from the Cheesecake Factory, including the restaurant's Bruléed French Toast, which consists of custard-soaked bread, powdered sugar, maple-butter syrup and bacon, and contains more than 2,700 calories, CSPI says. The meal also has 93 grams of saturated fat, which is nearly five days' worth, CSPI says. It would take seven hours of swimming laps to burn this meal off, the group says. [9 Snack Foods: Healthy or Not?]

"When French toast is ‘Bruléed,’ fries are 'bottomless,' and steaks are now garnished with not just one, but two Italian sausages, it’s clear that caloric extremism still rules the roost at many of America’s chain restaurants," said Paige Einstein, a dietitian at CSPI.

To help people avoid overeating while dining out, CSPI recommends the following, when possible: Order from the lower-calorie menu if one is offered; take home half of a regular meal; order alternative sides, such as steamed broccoli, in place of fries; order a burger with lettuce in place of the bun; order a thin-crust pizza instead of a deep-dish pizza; for Mexican dishes, order items à la carte instead of as a combo meal; and ask for no chips.