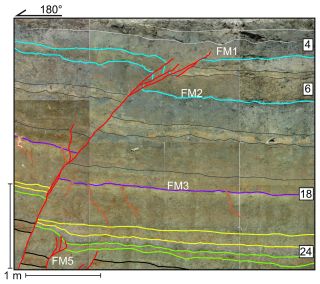 The wall of a trench dug across the San Andreas Fault near Frazier Mountain in Southern California. The lines mark different layers of sediment.
(Image: © Katherine Scharer)

The next big earthquake in Southern California could be smaller than expected, according to researchers who are rewriting the history of earthquakes on the San Andreas Fault.

The southern section of California's master fault, the San Andreas Fault, is less reliable than scientists once thought, their study has revealed. Instead of popping off big earthquakes with the predictability of a cuckoo clock, the fault seems to release its pent-up energy through a series of quakes that vary in size and timing. The findings also confirm that the San Andreas Fault's southern section has been unusually quiet since its last big earthquake in 1857.

"The norm is, on average, more frequent than what we've seen in the historic period," said lead study author Katherine Scharer, a geologist with the U.S. Geological Survey in Pasadena, California.

The San Andreas Fault marks the boundary between two tectonic plates. North America is grinding south, and the Pacific plate is inching north. Geologists divide the fault into several sections, each of which is connected to the other but also acts independently, like siblings. [Photo Journal: The Gorgeous San Andreas Fault]

Along the fault's southern section, the last major quake was the 1857 Fort Tejon temblor. Southern California was sparsely populated when the Fort Tejon quake hit, and only two people died. The fault ripped open for some 205 miles (330 kilometers), temporarily reversing the Kern River's flow.

Now, however, the specter of a severe earthquake on the southern San Andreas Fault looms large over Los Angeles. The U.S Geological Survey estimates that a similar-size earthquake today on the San Andreas Fault, a magnitude 7.8, would damage half the buildings in Los Angeles, destroy the city's water supply and injure more than 50,000 people.

Early research, conducted in the 1970s, suggested that the 1857 earthquake was the San Andreas Fault's characteristic style. But more recent findings, such as the new study, offer evidence that earthquakes on the master fault are more variable than researchers once thought. For example, near San Francisco, geologists have found evidence for several temblors in the decades before the big 1906 earthquake.

To investigate past earthquakes on the southern San Andreas, Scharer and her co-authors dug 30 trenches across the fault at Frazier Mountain, north of Los Angeles. The trenches exposed evidence of past earthquakes, buried in the dirt. By using radiocarbon dating of charcoal, the team pinpointed when the quakes occurred.

(An earthquake's size is determined by the length of the ripped-open fault. The team matched up the Frazier Mountain quakes to other study sites along the San Andreas to estimate each quake's size.)

Only one past earthquake approaches the 1857 temblor in size. The quake, which struck in 1515, may have ruptured all the way down to the Salton Sea, and would have generated severe shaking throughout Southern California. Scharer plans further research to confirm or reject this possibility.

"It's possible that the 1515 earthquake was quite large, or that there were two very large earthquakes that ruptured close in time," Scharer told Live Science.

While the findings only look back for seven centuries, the set of earthquakes affirm that the southern San Andreas Fault rattled Southern California more frequently before European settlers arrived. For example, the 1515 earthquake was quickly followed by a couple of magnitude-7.5 earthquakes, but the period following the 1857 earthquake has yet to see another magnitude-7.5 hit.

"Basically, this is showing you the San Andreas doesn't work like a clock," Scharer said. "We may get lucky and have a long quiet period, or maybe these more frequent ruptures are the norm.

"The caveat is, this is a short record, and I'd like to have a couple thousand of years," Scharer added. "I think the onus is really on making sure we're prepared for an earthquake, regardless of what the pattern is."

The findings were published July 14 in the journal Geophysical Research Letters.