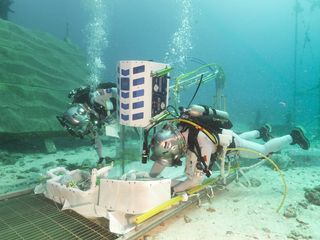 There aren't any places on Earth where astronauts in training can experience — all at once — the isolation, cramped quarters and microgravity of life in space. But one lab comes close.

Called the Aquarius Reef Base, the school-bus-size habitat is anchored on the seafloor 62 feet (19 meters) underwater and six miles (10 kilometers) off the coast of Key Largo, Florida. The lab is currently home to four astronauts (and two technicians) who are part of NASA's Extreme Environment Mission Operations (NEEMO) program. The crewmembers are testing equipment and procedures that could one day be used during trips to an asteroid or Mars.

"We're not really deprived of much," said Jeanette Epps, who spent more than seven years in the CIA and was selected to become a NASA astronaut in 2009. For their nine-day NASA mission, dubbed NEEMO-18, the crewmembers were allowed to bring iPads, iPhones, regular toiletries and a few sets of clothes. [The World's Most Extreme Laboratories]

"We have lots of windows and we got great views out here with fish," NASA astronaut Mark Vande Hei told Live Science yesterday (July 23) in a live news conference from the Aquarius seafloor habitat. "I am certain that none of us have felt claustrophobic."

Japanese astronaut Akihiko Hoshide — the commander of NEEMO-18, and the only one of the crew who has been to space — agreed and said their living quarters feel similar in size to one or two modules on board the International Space Station. It helps that their hygiene is good, Hoshide said, and they have a real shower — a luxury compared with the no-rinse shampoo and washcloths that astronauts use in space. Though Vande Hei admitted, "We're probably less sensitive to smell as we stay down here longer and longer."

The crew can also go outside basically any time they want. They just need to put on scuba gear first.

Life in Aquarius might be easier than it is in space, but sometimes mission controllers intentionally make it hard.

The astronauts have been performing several extravehicular activities, or EVAs, which are really just simulated underwater spacewalks. Being submerged in water is a good way to train for the microgravity environment in space, and by adjusting the weights on their diving gear, the "aquanauts" can even mimic the low gravity of the moon or Mars.

During those ventures outside the habitat, mission controllers often introduce a 10-minute time delay in their communications to mimic the lag astronauts visiting a far-flung celestial body, such as Mars, would experience when talking to mission managers on the ground.

"We have to take this time delay into account in the operations concept and even the design of those spacewalks," said French astronaut Thomas Pesquet, of the European Space Agency.

Epps and Hoshide went on a simulated spacewalk on Tuesday (July 22) to test cutting tools, drills and cores astronauts may need when they explore an asteroid or go to the moon or Mars. She described the experience as "intense," mostly because of the communication challenges.

The crew is participating in more passive experiments, too. When the astronauts sat around the galley table inside the habitat for a series of media interviews, they all showed off badges hanging from lanyards around their necks. Motion trackers on the badges will help behavioral health researchers on land study the way the crewmembers move and interact with each other in a closed environment. The four astronauts are also equipped with sensors that check their heart rate and the amount of light they're exposed to, as well as their activity levels. Occasionally, the astronauts take a swab of saliva, which will tell scientists what kinds of hormones they're releasing at certain times of day, Vande Hei said.

The researchers are not the only ones watching the aquanauts; potential observers include anyone with an Internet connection. Aquarius is owned by the National Oceanic and Atmospheric Administration (NOAA), but is operated by Florida International University, which is broadcasting six live feeds of the NEEMO 18 mission for those who want to live vicariously through the astronauts, or at least spy on them as they go about their daily tasks.