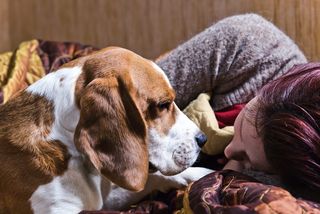 Man's best friend does not like anything muscling in on that friendship. The first experimental test of jealousy in dogs shows that canines nip even at stuffed pooches when these fakes take away the attention of the dogs' owners.

This new findings support the view that jealousy is a primordial emotion seen not only in humans, but in other animals as well, researchers said. The results also show that jealousy does not require especially complex minds, the scientists said.

Understanding jealousy is an important matter, because of the damage this emotion can trigger. "Jealousy is the third-leading cause of non-accidental homicide across cultures," said lead study author Christine Harris, an emotion researcher at the University of California, San Diego.

It is commonly assumed that jealousy is unique to humans, in part because of the complexity of thought the emotion entails, such as gauging what threat a rival poses to a relationship. The vast majority of research on jealousy concentrates on romantically linked jealousy over potential or actual infidelity. [Lie, Cheat & Steal: The 10 Most Destructive Human Behaviors]

However, scientists have argued for years over whether jealousy does require complex minds. In addition, researchers have noted jealousy is not always about sex, with the emotion frequently concerning siblings, friends and even co-workers. This suggests jealousy, at its most basic level, evolved to protect any social relationship from interlopers. All in all, this hints that jealousy might exist in other social animals; indeed, Darwin suggested that jealousy might exist among dogs, in particular.

Harris saw evidence of such canine jealousy first hand. "I was visiting my parents, who have three border collies, and I was petting two of them, and they both wanted to knock my hands off the other dog so that I was petting them with both my hands, not just one," Harris said. "They wanted exclusive attention. That got me to thinking about jealousy in dogs."

Since no prior experiments investigated jealousy in dogs, the researchers adapted a test used with human infants. A number of studies have found that infants as young as 6 months of age can demonstrate jealousy — for example, when their mothers interacted with what appeared to be another infant, but was actually a realistic-looking doll.

The scientists worked with 36 dogs in the dogs' own homes, videotaping the canines while their owners completely ignored their pets in favor of three different items: a stuffed animated dog that briefly wagged its tail, barked and whined; a jack-o'-lantern; and a pop-up children's book that played melodies. The researchers chose relatively small dogs, ones less than 35 pounds (15.8 kilograms) or shorter than 15 inches (38.1 centimeters), since smaller dogs would be easier to control in case their jealousy got out of hand. [What 7 Dog Breeds Say About Their Owner's Personality]

The owners were instructed to treat the fake dog and the jack-o'-lantern like they were real dogs, by petting the objects and talking to them sweetly. When it came to the book, the owners were asked to read the text out loud.

The scientists found dogs acted far more jealous when their owners displayed affection to the stuffed dog compared with the other items. The canines were nearly twice as likely to push or touch the owner when the owner was playing with the fake dog compared with the jack-o'-lantern, and more than three times as likely to do so when compared with the book. Furthermore, about one-third of the dogs tried to get between their owners and the stuffed toy. And while one-quarter of the dogs snapped at the fake dog, only one did so at the jack-o'-lantern and book.

"These weren't just aggressive acts they carried out. They tried positive things like being more affectionate to regain their loved one's attention, to try and gain their relationship back," Harris said.

These findings suggest the dogs believed the stuffed toy was a rival. Eighty-six percent of the dogs even sniffed the toy dog's rear end during or after the experiment.

"Many people have assumed that jealousy is a social construction of human beings, or that it's an emotion specifically tied to sexual and romantic relationships," Harris said in a statement. "Our results challenge these ideas, showing that animals besides ourselves display strong distress whenever a rival usurps a loved one's affection."

The reason for jealousy

These findings also challenge the notion that only humans, with their complex thoughts, can experience jealousy, the researchers said.

"This supports the idea that one can get jealous without needing complex cognition about the meaning of interactions between a rival and a loved one," Harris said. "All you need is losing the attention a loved one gives to a rival."

Interestingly, "not all dogs showed what we would think of as jealous behaviors," Harris said. "It's possible these are not very bright dogs, who didn't even realize these items were something to be jealous over, or maybe they were very bright dogs who were not fooled by these inanimate objects. Another possibility is that the bond may not have been very strong with the owner."

Future research might experiment with stuffed dogs that don't bark, whine or wag their tails, comparing them with ones that do, or experiment with other kinds of stuffed animals, such as fake cats or dolls of humans.

Future studies might also test if other animals get jealous. The researchers suggested examining species in which offspring vie with each other for attention, affection, care and food from their parents, and species in which animals bond in mating pairs. Domestic cats might be an interesting choice for analysis, since they bear litters of kittens that might compete with each other, but do not bond in mating pairs.

Harris and her colleague Caroline Prouvost detailed their findings online July 23 in the journal PLOS ONE.