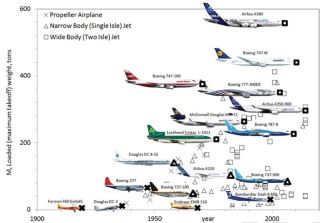 Evolution of the major airplane models during the 100-year history of aviation.
(Image: © Bejan/Duke)

Living creatures aren't the only things capable of evolution. Airplane designs are constantly evolving, too, a new study suggests.

Traditionally, people have thought it impossible to witness biological evolution, since it takes place on timescales much longer than a single human life. However, airplanes follow the same patterns of evolution as flying animals do, but over an observable period of time, researchers say.

"Here we show that we can witness evolution in our lifetime by watching the evolution of the flying human-and-machine species: the airplane," the authors wrote in the study, detailed Tuesday (July 22) in the Journal of Applied Physics.

Adrian Bejan, a mechanical engineer at Duke University in Durham, North Carolina, and his colleagues analyzed aircraft designs from the earliest days of manned flight. [Supersonic! The 10 Fastest Military Airplanes]

"Airplanes are flying buildings," the researchers wrote. "Every model is a new human-and-machine design for moving our bodies, groups and belongings over the entire globe."

"This, again, is akin to what we see among the flying creatures in nature, showing that airplanes converge [on] the architectural design rules that unite them with their living counterparts," Bejan said in a statement.

One exception to evolutionary trends among airplanes occurred with the Concorde, a retired supersonic passenger jet jointly built by British and French aircraft manufacturers in the 1960s. The Concorde could fly transatlantic flights, such as from New York to London, in less than half the time of other commercial airliners. The Concorde was small, with a long fuselage and short wingspan. In contrast to its predecessors, it had massive engines and poor fuel economy, the researchers said.

Airplane design can be considered a flow system, which is anything that has a branching pattern in its evolution, such as river basins, animal migration routes or city traffic.In 1996, Bejan developed a rule, known as the constructal law,which states that "for any finite flow system to persist, that is, be alive, it must evolve in such a way that it provides easier and easier access to its currents."

In this case, the "living" system is the flying-man-and-airplane, and its "currents" include properties such as the flow of the vehicle body mass on the world map, air currents around the body, and water and heat currents in the airplane engine, Bejan told Live Science.

Based on this model of airplane evolution, predicting the next phase of airplane design should be easy, the researchers said. They foresee the creation of more larger aircraft, with engine sizes and wingspans remaining proportional to fuselage sizes.

The findings suggest that the evolutionary process can be applied to more than just biology, Bejan said. "Evolution belongs in physics," he said.