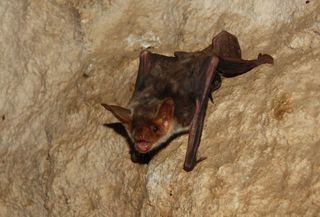 Polarized light is something people wear sunglasses to avoid, but for bats, it's actually useful, and can help them find their way.

The greater mouse-eared bat (Myotis myotis) is the first mammal known to navigate using polarized light — light waves that are parallel to each other and vibrate in a single plane. The bats use the scattered polarized rays at sunset to calibrate their internal compass and fly in the right direction, according to a new study, detailed today (July 22) in the journal Nature Communications.

"Every night through the spring, summer and autumn, bats leave their roosts in caves, trees and buildings to search for insect prey," Stefan Greif, a biologist at Queen's University Belfast in Northern Ireland and co-author of the study, said in a statement.

The bats often fly hundreds of miles in a night, returning home before sunrise to avoid predators. "But, until now, how they achieved such feats of navigation wasn't clear," Greif said. [Flying Mammals: Gallery of Spooky Bats]

Bats are well known for using echolocationto sense prey and communicate with otherswhile flying. But this sense only reaches about 160 feet (50 meters), so the animals must be using another sense to see farther ahead, the researchers said.

In the study, Greif and his team showed 70 adult female bats two types of polarization patterns at sunset. Then they released them at two different sites in Bulgaria at 1 a.m. — when no polarization was visible — about 12 to 16 miles (20 to 25 kilometers) from their roosts. The researchers attached tiny radio transmitters to the animals' backs in order to track their movement.

The bats that were shown shifted polarized light flew at a right angle to the direction of bats shown unshifted polarized light, suggesting they were using the polarization to guide their flight. The animals likely use a combination of echolocation, sight, the position of the sun or stars, and the Earth's magnetic field to find their way, the researchers said.

Bats aren't the only animals that can detect polarized light. Bees have special photoreceptors for seeing polarized light, and birds, fish, amphibians and reptiles all possess cone cell structures in their eyes to help them detect it, the researchers said. Even dung beetles may use polarized moonlight to navigate, studies have found.

But the researchers are unsure how the vampiric creatures detect polarized light. "We don't know which structure these bats might be using," study co-author Richard Holland, a zoologist also at Queen's University Belfast, said in the statement.

Polarization patterns are most easily seen at a 90-degree angle from the position of the sun at sunrise or sunset. Yet bats can detect them well after sunset, or when it's cloudy, the researchers said.

Many bat species are on the decline in Europe, with wind turbines being particularly dangerous for the animals. Although the bats can probably sense the turbines, the blades create wind patterns that give bats the equivalent of "the bends," the decompression sickness suffered by scuba divers, the researchers said.

Bats are natural pest controllers, so their protection has the potential to save millions of dollars, the researchers said.

Editor's Note: If you have an amazing animal photo you'd like to share for a possible story or image gallery, please contact managing editor Jeanna Bryner at LSphotos@livescience.com.