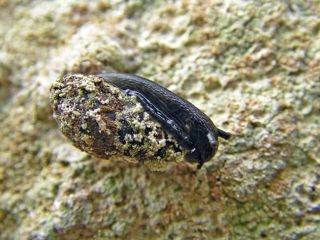 This land snail (Napaeus barquini) extends its body amazingly far beyond the shell margin to apply lichen material on the tip of its shell. Photo: Christoph Allgaier/University of Tubingen

Some snails take organic fashion to a new, and disgusting, level.

A land snail on the Canary Islands slurps up crusty lichens and applies them with its mouth to paint mounds of the mucky cover-up onto its shell. The result is a camouflaged snail that's not much of a looker.

Until now, it was a bit of a mystery how these snails got their cloaks of camouflage. Turns out, for Napaeus barquini, the camo is home-made.

Scientists previously thought the snails acquired their lichen layers sort of accidentally and weren't involved in actively dressing themselves.

The snail species lives on rocky surfaces coated with nodules of lichens, which are themselves a bit wacky. With a range of colors and shapes, lichens result from a partnership of cyanobacteria (sometimes called blue-green algae) and fungi (which are neither plants nor animals and nowadays comprise their own organismal kingdom).

Christoph Allgaier of the Eberhard Karls University of Tubingen in Germany investigated how N. barquini on La Gomera in the Canary Islands turns the lichens into shell cloaks.

With field and lab observations, he found the snails first graze lichen material from rock surfaces, pull the bits into their mouths and then use saliva to moisten the material. Allgaier suggests the saliva contains a natural adhesive.

Next, the gastropods deposit the moist material atop their shells. While the lichens are still wet, the snails sculpt the globs into protuberances that adhere as they dry out. N. barquini had to extend its body far beyond the shell margin to reach the entire outer shell surface to coat it with lichens.

In some instances, Allgaier said, the lichen protuberances reached a thickness up to 100 times that of the animal's shell. To ensure the crusty cape stays put, the snail somehow attaches the protuberances to the shell with mucus-like fibers.

"The snail possibly uses its head as a 'gluing stick' and applies additional mucus to the surface area of the protuberance and the shell," Allgaier notes in the September issue of the journal Zoological Science.   The results show that camouflaging is an active process for these snails, yielding a complex covering of self-shaped bumps all over the shell's surface.