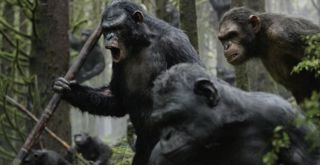 In the film "Dawn of the Planet of the Apes," a mutant chimp named Caesar can speak English.
(Image: © © 2013 - Twentieth Century Fox Film Corporation.)

In the new film "Dawn of the Planet of the Apes," a brilliant, mutant chimp named Caesar forcefully yells "Go!" at a group of humans who wandered into the ape population's forest. His deep, guttural voice startles the people, but his vocalizations are even more surprising.

While bands of apes do have ways of communicating with one another, is it possible for nonhuman primates to speak the way humans do?

"One school [of thought] believes that chimpanzees simply don't have the vocal apparatus, and others believe they do, but language as we know it just hasn't emerged or evolved," said Marc Bekoff, an ecologist and evolutionary biologist at the University of Colorado in Boulder. [8 Humanlike Behaviors of Primates]

Humans have vocal tracts that move freely and can be well coordinated, but the larynx muscles and vocal cords of apes don't have that same movement or coordination, according to the Max Planck Institute for Psycholinguistics.

It's also possible that apes haven't evolved to speak like humans because they haven't needed to.

"As a biologist, I would always say, 'If they needed to be able to speak like we do in a language like we have, they would,'" Bekoff told Live Science. "That doesn't mean they don't have their own language. All the great apes — of course, including chimpanzees — have very complex communication systems. They communicate using vocalizations, facial expressions, gestures, postures, gait … They can send very subtle signals with a lot of nuances by varying any one of [those] components."

Some primates have learned how to communicate in specific ways with their human handlers. One famous case is Kanzi, a 33-year-old bonobo. Scientists who worked with Kanzi think bonobos can understand English.

"Kanzi, for example, could figure out human sentences — even nonsense sentences," Bekoff said. Someone once asked Kanzi to take a microwave outside, and he followed that request, even though it wasn't a common kind of command, Bekoff added.

Yet, even though Kanzi could understand and carry out directions from humans, the bonobo's responses "were not anything close to being verbal," Bekoff said.

Some scientists think that although chimps and other great apes can learn vocabulary well enough to express their wants and needs, they still don't necessarily understand syntax, a key component of human language.

Herbert Terrace, a primate cognition scientist at Columbia University, has found that chimps cannot combine words in different orders to create new meaning — a skill that humans understand from a young age.

"I know of no example of a conversation by nonhuman animals," Terrace told Live Science via email in 2011.

Apes may not be able to speak like humans, but this probably doesn't have anything to do with the animals' intelligence, Bekoff said.

"A lot of animals that we don't think are particularly bright — because we have such a perverted sense of what it means to be bright — communicate in sophisticated ways," Bekoff said. For example, prairie dogs have a very complex way of communicating, using different vocalizations to signal a threat from various predators, Bekoff added.

In "Dawn of the Planet of the Apes," Caesar is the most fluent English speaker of the apes in the film, but other chimps, gorillas and orangutans seem to pick up on some of the leader's novel vocalizations. Learned behavior has been observed in real-life chimp communities, where some apes have picked up American Sign Language, Bekoff said.

"A lot of [chimps] learned sign language not by being explicitly taught, but by observing the other chimpanzees," Bekoff said. "They were acquiring American Sign Language by just observation, and somehow — to me, it's remarkable — they could then put meaning to the different signs."

The movie "Dawn of the Planet of the Apes" is out in theaters now. Bekoff is the author of the book " Why Dogs Hump and Bees Get Depressed: The Fascinating Science of Animal Intelligence, Emotions, Friendship, and Conservation."