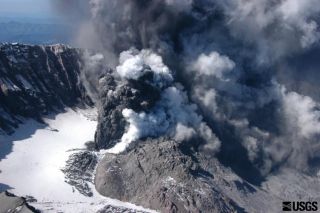 Molten rock travels a long road before it spews from volcanoes during deadly eruptions. Mapping out the journey could help scientists better understand how volcanoes work and improve early warnings of oncoming blasts, but tracking down blobs of magma deep within the Earth's crust is no easy task.

Now, at Washington's Mount Rainier and Mount St. Helens, two of the most dangerous volcanoes in the United States, researchers are getting their best look yet at magma's underground path via a pair of new scientific studies.

The first study, published today (July 16) in the journal Nature, clearly illustrates how magma is produced deep beneath Mount Rainier. With the second study, which is just getting underway, researchers hope to generate similarly revealing results for Mount St. Helens.

Birth of the Cascades

Mount Rainier and Mount St. Helens are two of scores of snow-capped volcanoes that march up the West Coast, from Northern California to British Columbia, Canada. If Mount Rainier erupts, its glaciers could melt and trigger lethal mudflows called lahars that would race through the Seattle-Tacoma metropolitan area. Similar lahars scoured the landscape when Mount St. Helens erupted in 1980. [Gallery: The Incredible Eruption of Mount St. Helens]

The Cascade volcanoes belch and smoke because of a collision between two tectonic plates — the pieces of crust that shift and slide on Earth's surface. One plate, the Juan de Fuca, is sliding eastward and descending below the westward-moving North American Plate. This collision between the two plates is called a subduction zone.

Subduction zones birth volcanoes because the sinking crust is wet — it's been soaking at the bottom of the ocean for millions of years. As the Juan de Fuca plate inches downward, the temperature and pressure on the plate rises, altering the rocks in the subducting crust. Water locked in minerals in the rocks escapes as the heat and pressure increase, and the water slowly rises toward the surface. Adding a little water to the rocks above the subduction zone lowers their melting point, creating magma.

In 2006, researchers measured variations in magnetic and electrical fields beneath Mount Rainier to see how this process of subduction feeds magma to Washington's volcanoes, Magnetic and electric conductivity fluctuates with changes in geologic structures underground, and water and molten rocks show up especially clearly with this method, said lead study author Shane McGary, a geophysicist at the College of New Jersey in Ewing. A seismic study done at the same time as the magentotelluric survey helped the researchers resolve the boundaries between solid and molten rock.

The results clearly illuminate the route molten rocks take from their underground birthplace in the subduction zone, to the magma chamber beneath Mount Rainer. [Big Blasts: History's 10 Most Destructive Volcanoes]

"The most striking thing is we can clearly see the slab to surface path," McGary said of the results.

Here's how Mount Rainer's magma forms, according to the study. Water escapes from the top of the Juan de Fuca plate about 50 miles (80 kilometers) below the volcano. The fluids come up and trigger melting in the overlying rock, and this mix of water and magma rises like an elevator straight toward the surface. (Water squeezed out at shallower depths of 25 miles (40 km) also travels over and joins this ascending mix.)

For unknown reasons, the elevator shaft is on the coastal side of Mount Rainier, not directly underneath the volcano. Within 12 miles (20 km) of the Earth's surface, the magma slush shifts eastward toward Mount Rainier.

"I don't think anyone knows why volcanoes don't form directly above [the rising magma], but this seems to be the characteristic of subduction zones," McGary said.

Soon, however, scientists may solve the puzzle of what's happening with the shifting magma.

This summer, a horde of volunteers is helping researchers set off small explosions all over Mount St. Helens to peer into the volcano's depth. The explosions are much smaller than the earthquakes that rock the volcano daily, and present no risk of setting off an eruption, according to the project scientists.

The energy from the explosions will be recorded on thousands of portable seismometers, or earthquake monitors, placed by volunteers. The experiment will provide the clearest picture yet of the geology beneath Mount St. Helens. The explosions are part of a $3 million, multiyear project called iMUSH, for Imaging Magma Under St. Helens.

"We conceived of the study because we have a decent idea of what's happening in the upper crust [underneath Mount St. Helens], but we've had trouble looking deeper," said John Vidale, director of the University of Washington-based Pacific Northwest Seismic Network, and one of the leaders of the project. "This will tell us where the pathways of the magma are, and the geologic structures through which they're moving."

In addition to the temporary seismometers, scientists will expand the permanent seismic listening network at the volcano and conduct a magnetic and electrical survey even larger than the Mount Rainier experiment.

The overall goal is to probe Mount St. Helens' depths and see how the volcano connects to its neighbors. For instance, does its magma pool in a giant underground reservoir that connects to Mount Rainier and Mount Adams? Or does each volcano have its own supply? And does the molten rock rise in fits and starts, or is there a speedy route to the surface?

"We know there's magma underneath these volcanoes, but if we can image the source and understand the relationship between them, it could tell us important things about this area," said Adam Schultz, a geophysicist at Oregon State University in Corvallis, who is also helping lead the project.

The answers will also help researchers understand how volcanoes fill their tanks after eruptions. Earlier this year, the U.S. Geological Survey announced that Mount St. Helens was showing signs of slowly filling again with magma.