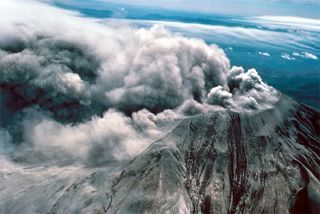 By early May 19, the devastating eruption was over.
(Image: © Photo taken on May 19 by Peter Lipman, USGS.)

The catastrophic eruption of Mount St. Helens on May 18, 1980 transformed modern understanding of volcanoes. But scientists today still struggle to successfully tap the deepest secrets of the mountain's foulest moods.

The 1980 outburst, a colossal event by modern volcano standards, killed 57 people as rocky debris, scalding hot steam and gas swept down the volcano's slope at more than 683 miles per hour (1,100 kilometers per hour) and reached temperatures of 572 degrees Fahrenheit. The tempestuous volcano also hurled about 540 million tons of ash into the air, and has since earned celebrity status as perhaps the most studied volcano today.

"It was a very big and decently well-monitored eruption," said Seth Moran, a volcano seismologist with the U.S. Geological Survey. "But time has marched on, and technology has advanced quite a bit since then."

Better instruments and scientific tools now give an unparalleled view of volcanic life cycles. And yet scientists know that the gaps in their knowledge still leave them one step behind in forecasting the probability of the next big eruption.

The defining moment of the Mount St. Helens eruption came in the form of a mammoth landslide from the volcano's north flank — the largest landslide in recorded history. That set off the huge lateral blast and ash cloud.

"It wasn't generally appreciated before 1980 that volcanoes could produce large landslides like that," Moran told LiveScience. "Now it's generally recognized that landslides happen as part of the life cycle of volcanoes, that they build themselves up and then fall apart."

More than 10,000 local earthquakes led up to event, but scientists had trouble pinpointing the source based on the one seismometer located near the volcano. Moran cited the example as a valuable lesson for having instruments in place beforehand, so that scientists can avoid the scramble to set up once a volcano came alive. That approach has paid off handsomely since.

"During the activity at Mount St. Helens from 1981-1986 — after the big eruption — we were able to make quite accurate predictions of individual eruptions," said Katharine Cashman, a volcanologist at the University of Oregon.

The scientific arsenal of monitoring tools has improved as well. Now GPS sensors and satellites help scientists better understand both the familiar and less-obvious signs of a volcano preparing to unleash hot fury. The 1980 Mount St. Helens eruption showed that just having data from one source is hardly enough to know what's happening, according to Moran.

For instance, earthquakes leading up to the 1980 explosion ramped up in scale, but eventually plateaued before the catastrophic eruption. Scientists needed more ways of measuring telltale signs closer to the actual eruption, such as using lasers to measure the growing bulge on Mount St. Helens' slope. Other signs can come from sampling the volcanic gases for traces of molten rock, and taking temperature profiles of beneath the volcano to gauge if hot magma has neared the surface.

For all the technology in the world, there's a huge blind spot in scientific understanding of Mount St. Helens — scientists still don't know how eruptions start in the first place.

"We have decent models of what we think the volcano looks like down to 6 miles (10 km) below the surface," Moran said. "From 6 to 20 miles down we don't have a very good idea. Geophysical imaging techniques haven't been very good at producing images at those depths."

The blind spot has led to even more puzzlement during a series of recent eruptions from 2004-2008, where the volcano only coughed up strangely solid magma that looked as though it had sat around for more than a decade — a stark contrast to the typically fluid magma (called lava once it breaks through Earth’s surface).

"We know that there were earthquake swarms in the late 1980s and mid 1990s that appeared to indicate re-pressurization of the magma system," Cashman pointed out. "However, there was no immediate trigger to the October 2004 eruption ... which means that there are still things that we do not know about the deep workings of the Mount St. Helens magmatic system."

That makes volcano forecasting an iffy game, but one that scientists must play despite risking embarrassment for issuing false alarms, or much worse, lost lives. In the near future, better communication and faster information processing could help the monitoring networks keep up with fast-moving volcanic events.

"We really want to get to know the signs of a restless volcano that won't erupt, and that will erupt," Moran said.

Waiting for the next big one

Today, Mount St. Helens and the other Cascade Range Volcanoes remain a quiet but very real threat stretching across Washington State, Oregon and northern California. Moran and his colleagues hope to use the lull to place more monitoring instruments on other volcanoes, such as Mount Rainier in Washington State and Mount Hood in Oregon.

"Our best clue is the geological history and what the volcano has done in the past," Moran explained. He added that other volcanoes that had displayed similar geophysical symptoms could also provide useful hints for future forecasting models.

Another eruption from Mount St. Helens in the next decade or two might represent something similar to the low-key eruptions from 2004-2008. People would probably find that preferable to waiting even longer for the sleeping giant to blow its top once again.

"If the volcano goes back to sleep for another 100-plus years, then an explosive eruption would be more likely," Cashman said. "However, we won't see another 1980 event, which was characterized by a massive failure of the volcano's north flank, until the volcano rebuilds!"