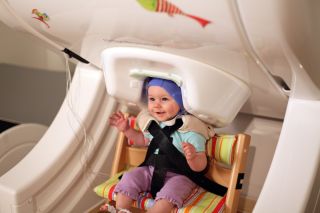 Babies may practice saying words in their minds long before they speak them, new research has found. Here, a baby undergoing the experiment, which used a non-invasive technique called magnetoencephalography to measure brain response as the baby heard syllables such as "da" and "ta"
(Image: © Institute for Learning & Brain Sciences at the University of Washington)

Months before they say their first real "mama" or "dada," babies are practicing those words in their heads, new research suggests.

Brain areas associated with speech motor planning light up in 7-month-old babies, even though little ones don't usually talk until they are 1 year old.

"Finding activation in motor areas of the brain when infants are simply listening is significant, because it means the baby brain is engaged in trying to talk back right from the start, and suggests that 7-month-olds' brains are already trying to figure out how to make the right movements that will produce words," lead author Patricia Kuhl, who is the co-director of the University of Washington's Institute for Learning and Brain Sciences, said in a statement. [In Photos: How Babies Learn]

Babies start developing language very early. For instance, researchers have found that infants as little as 6 months can understand words.

By 7 months old, babies can distinguish different speech sounds, such as whether someone is talking English or Swahili.

But by their first birthday, babies focus mainly on the sounds they hear most often. Scientists don't yet have a clear picture of how the brain transitions from listening to everything, to focusing on a native language.

To understand more about this transition, Kuhl and her colleagues looked at 57 babies, who were either 7-months or 11- to 12-months-old, in a non-invasive brain scanner. The researchers played the sounds of syllables such as "da" from both English, the babies' native language, and Spanish, a foreign one, while measuring the little ones' brain activation.

Several areas associated with planning the movements of speech lit up, including Broca's area, the cerebellum and an auditory region called the superior temporal gyrus.

The babies were likely practicing speech movement months before they were able to say their first words, the researchers said.

At 7 months, these motor planning regions activated equally for both foreign and familiar sounds, but older babies showed more activation when they heard sounds that were unfamiliar. The team hypothesized that the older babies were, in essence, working harder to predict which movements they would need to do to make unfamiliar sounds.

The researchers said they suspect these motor-planning regions of the brain may play a role in infants' transition to focusing on native language.

The new results underscore how important it is to talk to babies, even if they can't talk back.

"Hearing us talk exercises the action areas of infants' brains, going beyond what we thought happens when we talk to them," Kuhl said. "Infants' brains are preparing them to act on the world by practicing how to speak before they actually say a word."

The findings were published today (July 14) in the journal Proceedings of the National academy of Sciences.