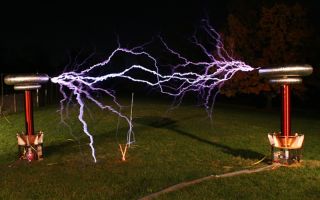 Among his numerous innovations, Nikola Tesla dreamed of creating a way to supply power to the world without stringing wires across the globe. The inventor came close to accomplishing this when his "mad scientist" experiments with electricity led to his creation of the Tesla coil.

The first system that could wirelessly transmit electricity, the Tesla coil was a truly revolutionary invention. Early radio antennas and telegraphy used the invention, but variations of the coil can also do things that are just plain cool — like shoot lightning bolts, send electric currents through the body and create electron winds.

Tesla developed the coil in 1891, before conventional iron-core transformers were used to power things like lighting systems and telephone circuits. These conventional transformers can't withstand the high frequency and high voltage that the looser coils in Tesla's invention can tolerate. The concept behind the coil is actually fairly simple and makes use of electromagnetic force and resonance. Employing copper wire and glass bottles, an amateur electrician can build a Tesla coil that can produce a quarter of a million volts. [Infographic: How the Tesla Coil Works]

A Tesla coil consists of two parts: a primary coil and secondary coil, each with its own capacitor. (Capacitors store electrical energy just like batteries.) The two coils and capacitors are connected by a spark gap — a gap of air between two electrodes that generates the spark of electricity. An outside source hooked up to a transformer powers the whole system. Essentially, the Tesla coil is two open electric circuits connected to a spark gap.

A Tesla coil needs a high-voltage power source. A regular power source fed through a transformer can produce a current with the necessary power (at least thousands of volts).

In this case, a transformer can convert the low voltage of main power into the high voltage.

The power source is hooked up to the primary coil. The primary coil's capacitor acts like a sponge and soaks up the charge. The primary coil itself must be able to withstand the massive charge and huge surges of current, so the coil is usually made out of copper, a good conductor of electricity. Eventually, the capacitor builds up so much charge that it breaks down the air resistance in the spark gap. Then, similar to squeezing out a soaked sponge, the current flows out of the capacitor down the primary coil and creates a magnetic field.

In a perfectly designed Tesla coil, when the secondary coil reaches its maximum charge, the whole process should start over again and the device should become self-sustaining. In practice, however, this does not happen. The heated air in the spark gap pulls some of the electricity away from the secondary coil and back into the gap, so eventually the Tesla coil will run out of energy. This is why the coil must be hooked up to an outside power supply.

The principle behind the Tesla coil is to achieve a phenomenon called resonance. This happens when the primary coil shoots the current into the secondary coil at just the right time to maximize the energy transferred into the secondary coil. Think of it as timing when to push someone on a swing in order to make it go as high as possible.

Setting up a Tesla coil with an adjustable rotary spark gap gives the operator more control over the voltage of the current it produces. This is how coils can create crazy lightning displays and can even be set up to play music timed to bursts of current.

While the Tesla coil does not have much practical application anymore, Tesla’s invention completely revolutionized the way electricity was understood and used. Radios and televisions still use variations of the Tesla coil today.