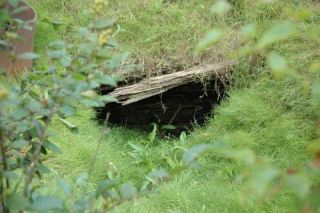 The original pit dug by Daniel McGinnis and friends is thought to be located a short distance behind this shaft, and this is where a great deal of excavation activity has taken place over the past 200 years. Photo
(Image: © Mad Davy Kidd; used with permission.)

It may look like a fixer-upper at first glance, but what is buried beneath scrubby little Oak Island might just make its estimated $7 million price tag worth the investment.

Oak Island, in Nova Scotia, is famous for its Money Pit, a mystery that has endured two centuries, claimed six lives and swallowed up millions in life savings.

The Pit was discovered in 1795 by a local boy named Daniel McGinnis who, spotting an unusual clearing in the earth under one of the island's oak trees, was prompted to start digging. The discovery of layered planks, mysterious stone slabs, and mats made of coconut fibers descending deep into the ground turned his casual afternoon dig into an all-out excavation.

Investors and thrill-seekers would eventually jump in and continue the work, kicking off one of the world's longest running treasure hunts.

What appears to be a complex flooding trap has thwarted efforts to reach the bottom of the Money Pit ever since. Some think the pit was purposely flooded with seawater, via a series of artificial swamps and tunnels, to hide its contents.

Through the murk, drill borings and shafts dug by the island's series of owners have detected what seem to be cement vaulting, wooden chests, and scraps of parchment paper. Radiocarbon dating of these artifacts is consistent: whoever constructed the shaft likely did so sometime in the 16th Century.

Speculation about the contents of Oak Island's Money Pit range from the treasure of the Knight's Templar to Shakespeare's original manuscripts.

Oak Island's current owners, Dan Blankenship and David Tobias, have worked on the island since the 1960s, sinking millions of dollars into the project and revealing some intriguing clues of their own. For many who follow Oak Island developments, their abandonment of the treasure comes as a surprise. As recently as December of 2003, Blankenship told the Halifax Herald that he would announce some new, exciting findings in the following months. The revelation never came.

The treasure's fate -- assuming there is treasure -- now rests on the outcome of the sale. Court-appointed liquidators in Nova Scotia are currently wrapping up the evaluation of Oak Island's market worth, with an announcement expected before the end of the year.

A growing movement led by the Oak Island Tourism Society calls for the governments of Canada or Nova Scotia to purchase Oak Island and exploit its potential as a major attraction. It seems for now the governments have little interest in throwing their hats into the ring of potential bidders, and that has many who've follow the island's saga breathing sighs of relief.

"The ideal candidate would be an individual or group with a genuine interest in and means to carry out professional archaeological work", Mark Finnan, author of "Oak Island Secrets" (Formac, 1997) told LiveScience in an e-mail interview.

Finnan believes Oak Island has not seen the last of the aging treasure-seeker Dan Blankenship, either.

"He has a strong hunch about the nature of the treasure and may yet pass on his findings to the new owners of the land or even participate in a new exploration effort," Finnan said.