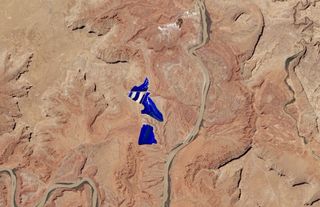 Bright blue evaporation ponds are part of a potash mine near Moab, Utah. This satellite image was taken on May 13, 2014.
(Image: © NASA Earth Observatory image by Jesse Allen and Robert Simmon, using Landsat data from the U.S. Geological Survey)

A new satellite photograph shows an unnatural splash of color in the desert — bright blue evaporation ponds at a potash mine in Utah.

A potash mine sits aside the Colorado River about 20 miles (32 kilometers) west of Moab, Utah, in this snapshot taken May 13 by an instrument aboard the Landsat 8 satellite, according to NASA's Earth Observatory. The cluster of white shapes near the top center of the picture is the mine itself. The jewel-like blue areas are evaporation ponds, where the sun whisks away water pumped from the mine, leaving potash behind.

Potash is a salt that contains water-soluble potassium. It is used mostly in fertilizers. The mine in this image, operated by Denver, Colorado-based Intrepid Potash, produces muriate of potash, or potassium chloride. This substance is the ingredient in 95 percent of all potash fertilizers, according to Agrow, a fertilizer marketing company in Australia.

To extract potash from the ground, workers drill wells into the mine and pump water down 2,400 to 4,000 feet (731 to 1,219 meters). There, the water dissolves potassium in the rock. The resulting brine is pumped out of the wells through extraction wells, which bring the liquid to the surface. From there, the brine goes to the evaporation ponds. The sun evaporates the water, leaving behind crystals of potassium and other salt, according to Intrepid Potash. [Shine On: A Gallery of Gorgeous Minerals]

These ponds measure 0.6 square miles (1.5 square kilometers), and are lined with rubber to keep the salts in. They get their bright blue color from a food-coloring-like dye that is added to prompt the absorption of sunlight. Once the potassium and salts are left behind, earth-scrapers gather the substance and send it off for processing.

Potash ore forms from the remnants of inland seas or lakes, according to the Earth Observatory. Over time, the waters dry out, leaving behind salts that become buried. The potash ore near Moab is about 300 million years old. The mine has been open since 1965, and Intrepid Potash expects to get at least 125 more years of production out of it before the potash ore runs out.

Similar mining techniques are used in other deserts, where sunlight and low humidity aid quick evaporation. In the Atacama Desert of Chile, for example, geometric patterns that look like art by the painter Piet Mondrian are actually evaporation ponds for nitrates and other minerals. Nitrates are another major fertilizer ingredient.