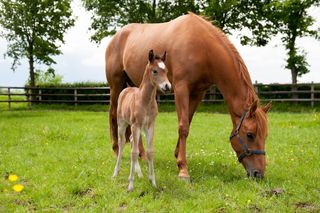 Attention horse lovers: A new technique could make it easier to breed the next Secretariat or Flicka.

Four new foals have been born from frozen embryos, a tricky task given the structure of horse embryos. The baby horses were born healthy after spending 11 months gestating in mares at a stud farm in France. The new technique could one day help breeders create horses with tailor-made traits, such as racing speed, friendliness or docility.

Though children are routinely born from frozen human embryos, horse embryos are much larger — up to 0.02 inches (0.7 millimeters) in diameter. This means the eggs contain large amounts of fluid, and this liquid morphs into ice crystals during the freezing process, leading to cell damage. An outer shell also encapsulates horse embryos, foiling the process of cryopreservation, in which cells or tissue are preserved at below-freezing temperatures.

To overcome these challenges and create the new foals, a team collected embryos from a line of Welsh B ponies at the French National Institute for Agricultural Research, then did genetic analysis and determined the sex of the embryos after perfecting the embryo-freezing technique. The embryos were frozen in liquid nitrogen, at a temperature of -321 degrees Fahrenheit (-196 degrees Celsius).

Next, the team inserted the embryos into mares living at a stud farm in France. Just shy of a year later, the foals — two males and two females — were born in fine health.

Horse breeders could use the new technique could to help preserve rare horse lineages, such as the Landais breed, or to repopulate dwindling herds with hardier individuals after disease has decimated these populations' ranks. The combination of embryo transfer and genetic analysis could make selective breeding for unique traits more precise, unlike traditional crossbreeding, the scientists said.

In addition, the method could make selective breeding via embryo transfer more feasible. Currently, breeders rely on crossbreeding as the default technique, in part because embryo transfer costs so much. Egg donor mares need to be at the same point in their reproductive cycle as gestational carriers. The new method means the two populations don't have to be in sync for the embryo transfer to work, which could lower costs, the researchers said.