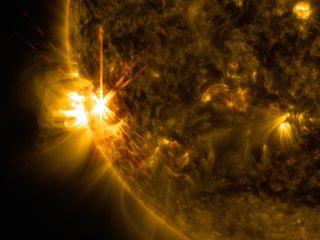 A solar flare bursts off the left limb of the sun in this image captured by NASA's Solar Dynamics Observatory on June 11, 2014.
(Image: © NASA/SDO/Goddard)

The sun has unleashed three powerful solar flares over the past two days, and the effects of these eruptions could hit Earth this Friday the 13th — but don't worry, space weather reports show there's no cause for alarm.

Solar flares are powerful bursts of radiation that are unleashed from the sun and speed out into space. They can sometimes produce waves of plasma and charged particles, called coronal mass ejections (CMEs). When aimed directly at Earth, CMEs can trigger geomagnetic storms and knock out communications and power grids on Earth. So far, scientists have not observed a CME associated with this morning's flare, but yesterday's flares produced a CME that could hit Earth on Friday — Friday the 13th. [The Surprising Origins of 9 Common Superstitions]

The fallout from the first two flares is expected to deal Earth a glancing blow, according to Spaceweather.com, but the CME could still create polar geomagnetic storms. Geomagnetic storms occur when solar particles interact with Earth's magnetic field.

A particularly powerful storm can create geomagnetic currents that interrupt power grids and throw off magnetic compasses, scientists have said. The storms can also produce auroras, the beautiful displays known as the Northern Lights. A powerful storm can supercharge auroras outside their normal latitude ranges, with some spectacular displays visible as far south as Texas.

Tuesday's solar flares caused a radio blackout that blocked all high-frequency radio communication on the sunlit side of Earth for about an hour, according to the U.S. Space Weather Prediction Center (SWPC), which is based in Boulder, Colorado. Yesterday's solar flare produced the same effect.

If the geomagnetic storm forecasted for Friday hits, it will likely only produce a G1 storm, the least intense type. Therefore, it's unlikely that communication instruments will be disrupted, and space weather experts are not forecasting any unusual aurora displays, SWPC officials said.

As the sun rotates, it could shoot off additional flares that could end up pointing more directly at Earth, according to Spaceweather.com.

Strong flares and CMEs can also be hazardous to astronauts aboard the International Space Station and disrupt satellites in orbit around the planet.