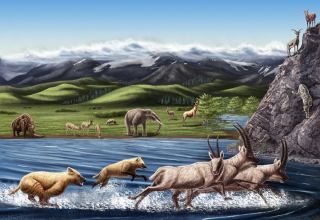 Artist's reconstruction of fauna from the Zanda Basin of Tibet dating to the Pliocene about 3 million to 5 million years ago.
(Image: © Julie Selan)

The fossilized jawbone and teeth of a 5-million-year-old fox have been unearthed in Tibet.

The fox, Vulpes qiuzhudingi, is probably the ancestor of modern Arctic foxes. The discovery, along with several other fossils from cold-loving mammals, buttress the Out of Tibet hypothesis: That iconic ice-age mammals such as woolly mammoths, saber-toothed tigers and giant sloths first evolved for the cold weather in Tibet before fanning out over the steppes of Central Asia and into North America.

Several years ago, paleontologists excavating the Zanda Basin in Tibet unearthed a 3.7-million-year-old woolly rhino fossil that not only was older than all other fossils of the species, but also was found much farther south than those prior specimens. At that time, the Arctic was much warmer than it is today, whereas the snowy, high Tibetan plateau was just a touch warmer, said study co-author Zhijie Jack Tseng, a paleontologist at the American Museum of Natural History in New York. [High & Dry: Images of the Himalayas and the Tibetan Plateau]

That led the researchers to propose that the frigid, high-altitude climate of Tibet was a staging ground where many of the shaggy-coated, cold-loving megafauna first adapted to the cold. When Earth's temperatures plunged at the onset of the last ice age about 2.6 million years ago, these cold-loving creatures emerged from the Tibetan plateau to colonize most of the Arctic and colder portions of North America.

In 2006, the researchers also found a single tooth in the Zanda Basin, but couldn't match it to a specific animal species. Over the next several years, they went on to find two other fossils that revealed the lower jaw and some of the teeth from ancient predatory foxes, allowing them to identify the original tooth as well.

The fox fossils ranged from 3.6 million to 5 million years old, and the teeth looked a lot like those of the modern Arctic fox, which now lives across the Arctic, from Scandinavia and Russia in the west all the way to Greenland and Iceland.

"The arrangement of the cusps on the tooth are more or less in a straight line and pretty sharp," Tseng told Live Science. "That meant that the fox was using that tooth for cutting and shearing meat," just as the Arctic fox does today.

The discovery marks the first time that an older predecessor to a modern Arctic creature has been found in Tibet, buttressing the Out of Tibet hypothesis, Tseng said.

The team has also found other fossils from archaic, cold-adapted mammals throughout Tibet, such as ancient snow leopards, wolf-sized dogs and hyenas. And, just like modern Arctic species that must subsist mainly on meat during the long, frosty winter months when plant-based food is almost nonexistent, these ancient animals were more carnivorous than similar animals that live in more temperate climates, Tseng said.

The findings were published Tuesday (June 10) in the journal Proceedings of the Royal Society B.