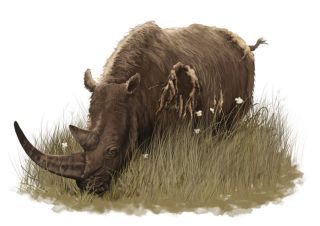 This artist's reconstruction shows a woolly rhinoceros grazing in the plains of northern Thuringia in Germany.
(Image: © © Dionisio Álvarez.)

A woolly rhinoceros was just 12 years old when it died in a pool of meltwater flowing off an inland glacier in Germany. That was 460,000 years ago. Now, scientists have pieced together the skull of this extinct mega-mammal and found it to be the oldest woolly rhinoceros in Europe.

The skull was discovered more than a century ago in a gravel pit at the foot of the Kyffhäuser range, near Bad Frankenhausen (a town in Germany), but it was broken into more than 50 fragments.

"This is the oldest woolly rhinoceros found in Europe, and it gives us a precise date for the first appearance of cold-climate animals spreading throughout Asia and Europe during the ice ages," said researcher Ralf-Dietrich Kahlke, a paleontologist at the Frankfurt Senckenberg Research Institute.

The reconstructed skull reveals that like other rhinoceroses these large mammals, called Coelodonta tologoijensis, sported two big horns on the bridges of their noses, Kahlke said. The woolly rhinos apparently roamed central Germany at the foot of the unforested, rocky slopes of the Kyffhäuser range that loomed out of the broad, bleak plains of northern Thuringia. The climate at the time was icy cold and far drier than today, and fluctuated a great deal.

"Analysis of the Frankenhausen specimen shows that Coelodonta tologoijensis carried its head low along the ground and had a lawnmower-like mouth with a huge set of grinding teeth," Kahlke said. "As the climate became colder, these animals became more efficient at utilizing the available food."

At the time, the brow of a glacier extended to a site only a few kilometers away from where the skull fragments were found.

(During the Quarternary period, from about 1.6 million years ago to the present, the climate fluctuated between cold and warm periods known as ice ages and interglacial stages.)

Well-adapted creatures such as woolly mammoths, reindeer, musk ox and other cold-climate animals were able to survive in what was known as the mammoth steppe, finding suitable food sources there.

The researchers say the woolly rhinoceros continued to adapt to meet the changing conditions throughout many millennia. For instance, its ancestors had evolved around 2 million years earlier in the northern foothills of the Himalayas. The original diet of these ancestors was mixed, and included leaves of shrubs and trees. But as the landscape became more desert-like, the animals specialized in browsing for steppe food that grew low to the ground.