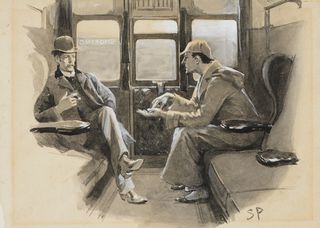 What do microchips, Sherlock Holmes and J.D. Salinger have in common? They — or, at least, artifacts pertaining to them — are up for sale at an upcoming auction in New York.

Headlining the June 19 sale by Christie's auction house is a prototype microchip created for Jack Kilby, the Nobel Prize-winning electrical engineer credited with co-inventing the world-changing miniature circuit. The prototype was built by Tom Yeargan, a member of the team that implemented Kilby's microchip design for Texas Instruments in 1958.

Estimated between $1 million and $2 million, the chip is made from a germanium wafer with gold wiring and four leads. It's up for sale along with another circuit, this one made from silicon, that contains five gold and platinum leads. Accompanying these tiny pieces of computing history is a three-page statement from Yeargan, dated March, 6 1964, which describes the process of inventing the world's first integrated circuit.

Of course, microchips aren't everyone's cup of tea. For book lovers, there are several items worth perusing at this diverse auction, aptly named "Fine Printed Books and Manuscripts Including Americana." For instance, a rare 15th-century Bible is up for sale. The color-illuminated manuscript, which is written in Hebrew and includes the majority of the books of the Bible, is expected to go for as much as $700,000. It was transcribed in 1546 by the son of Rabbi Moshe Arragel, who is best known for his role in the production of the Alba Bible, one of the earliest known translations of the Old Testament into a romance language (Medieval Castilian). [See Images of Holmes Manuscript & Other Auction Items]

Other exciting finds at this month's auction include an original Sherlock Holmes manuscript, "The Adventure of Black Peter." The manuscript, which is expected to sell for between $250,000 and $350,000 at auction, includes an autographed letter from the author, Arthur Conan Doyle, who apparently gave the book to Peter F. Collier — founder and publisher of Collier's Weekly magazine — as a Christmas gift in 1908.

And fans of J.D. Salinger, the notoriously reclusive author of "The Catcher in the Rye" (Little, Brown and Co., July 1951), might be interested to know the upcoming auction will also feature a collection of 41 typed and handwritten letters from Salinger to a 15-year-old female fan.

The 66-page collection, estimated to go for as much as $240,000, is the largest archive of Salinger correspondence ever to appear at auction and, according to Christie's, contains a wealth of biological and psychological detail about the author.

"Most of my mail is pretty terrible," Salinger writes in his initial letter to his young admirer. "So it's a pleasure and a relief when anything readable comes in." The subsequent correspondence spans the course of a decade (1966-1976) and touches on themes such as Salinger's thoughts on other writers, as well as his own thoughts about the works he had in progress.

The auction will also feature several rare, first-edition books, including an early American edition of "The Little Prince" (Reynal & Hitchcock, 1943) by the celebrated French author Antoine de Saint-Exupéry. The book, which includes an inscription and illustration by the author, could sell for $150,000 or more.

Another rare book up for sale is the "Works of Geoffrey Chaucer" (Kelmscott Press, 1896). The book is widely considered the masterpiece of Kelmscott Press, the world-renowned press established by English writer and artist, William Morris. Morris, who founded the press in 1891 to republish medieval manuscripts using Victorian typography, published only 438 copies of Chaucer's famous 14th century work. Bound in white pigskin by Doves Bindery and featuring 87 woodcut illustrations, the book is expected to fetch up to $150,000 at auction.

Last, but certainly not least, is a historical treasure from the other side of the pond. Widely considered one of the finest photographic records of the U.S. Civil War, the copy of "Gardner's Photographic Sketch Book of the War" (1866) is one of only 200 copies ever issued. The book, which features more than 100 prints, spans the Civil War from the first battles at Centerville and Manassas in 1862 to the dedication of the commemorative monument at Bull Run in 1865. Though the two-volume book originally went for just $150, it's expected to fetch at least $100,000 at auction.