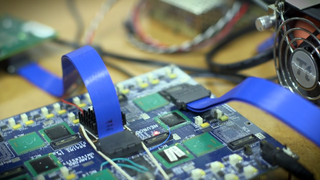 Despite advances in computing, today's computers remain far less efficient than the 3-lb. (2.3-kg) hunk of matter in our skulls. But a new microchip modeled on the human brain is much faster and more efficient than a typical computer, researchers report.

The microchip — called "Neurogrid" — could open up windows into understanding the human brain and developing new forms of computing patterned after brain circuits. Researchers are now investigating how these chips could be used to control prosthetic limbs.

"From a pure energy perspective, the brain is hard to match," Kwabena Boahen, the bioengineer at Stanford University who led the chip's development, said in a statement. Not only are personal computers slower, they take 40,000 times more power than the brain to run, Boahen said. [Super-Intelligent Machines: 7 Robotic Futures]

Neurogrid consists of 16 custom-designed Neurocore chips in a device the size of an iPad, which can simulate 1 million neurons and billions of synapses, or brain connections. That's a vast improvement over previous brain simulations, but still only a fraction of the roughly 80 billion neurons in a human brain, researchers said.

Neurogrid uses about 9,000 times less power than a typical PC, by having synapses share hardware circuits, and about the same amount of power as a tablet.

In addition to modeling the human brain, Boahen is working with other Stanford researchers to adapt Neurogrid for controlling prosthetic limbs for paralyzed people. The chip would translate brain signals into movements of the limb, without overheating the brain. Another possible application is using Neurogrid to control humanoid robots.

Currently, programming the chip requires an understanding of how the brain works. But Boahen wants to create a "neurocompiler" that would let engineers and computer scientists with no neuroscience knowledge to program Neurogrid.

The Stanford team's work is just one of many efforts to model the human brain using computers. The European Union's Human Brain Project aims to simulate a human brain on a supercomputer. The U.S. BRAIN Initiative (short for Brain Research through Advancing Innovative Neurotechnologies) takes a more general approach, developing new tools for measuring neuron and brain circuit activity.

IBM's SyNAPSE project (short for Systems of Neuromorphic Adaptive Plastic Scalable Electronics) aims to design chips, called Golden Gate chips, modeled after the vast number of connections among neurons in the brain that help it solve problems efficiently. Each Golden Gate chip consists of 256 digital neurons with 1,024 digital synapses each, and the company plans to increase these numbers.

Germany's Heidelberg University has its BrainScales project, which aims to create analog chips that mimic neurons and synapses that could model drug interactions at a faster rate than currently possible. Researchers have developed the HICANN chip (short for High Input Count Analog Neural Network), which can simulate 512 neurons with 224 synapses each, which they also plan to expand soon.

These various efforts have made different trade-offs in capability and performance, but Neurogrid was the most cost-effective, Boahen said.

The prototype Neurogrid chip cost about $40,000 to make, but researchers hope to cut the cost 100-fold using modern manufacturing techniques. Even so, modeling the human brain at the same energy efficiency remains a major challenge, according to researchers.