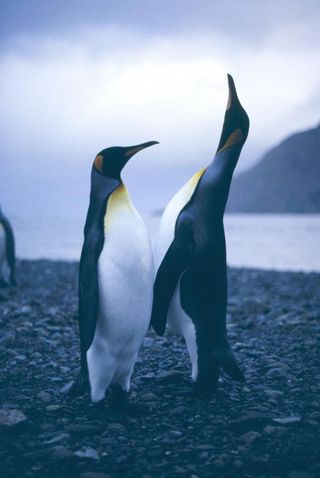 King penguins colonized a string of islands north of Antarctica about 15,000 years ago, after glaciers melted and the climate warmed, according to a new genetic study.

The balmier weather gave the penguins two things they needed to thrive: ice-free pockets of land on which to raise their chicks, and food within swimming range for feeding those chicks, the study found.

"When you have these two conditions, these two parameters that are met, then the population can just explode," said study co-author Emiliano Trucchi, an evolutionary biologist at the University of Vienna in Austria. [In Photos: The King Penguins of Possession Island]

King penguins (Aptenodytes patagonicus) are the second-largest penguins in the world and live on temperate islands that are closest to Antarctica, such as South Georgia, Tierra del Fuego and the Falkland Islands.

But the biggest breeding grounds for king penguins are on the Crozet Islands, a string of islands in the southern reaches of the Indian Ocean.

In the summer, the penguins dive for tiny lanternfishes about 250 miles (400 kilometers) from the archipelago, returning every three to five days to feed their chicks. The lanternfishes congregate in an ocean region called the polar front, where cold polar water meets the warmer tropical water, creating a sharp temperature gradient. In the winter, the penguins venture about 621 miles (1,000 km) to the fringes of Antarctica to forage for food, though exactly what they eat is a mystery, said study co-author Céline Le Bohec, a polar ecologist at the Centre Scientifique de Monaco.

To understand how the flightless birds first reached the Crozet Islands, Le Bohec and her colleagues snuck onto the edges of the penguins' breeding colonies, quietly taking two- to three-week-old chicks from right under their parents' noses and replacing them with fake eggs.

"This is really weird," Le Bohec told Live Science. "If you are delicate enough and quick enough, really the adult doesn't notice what you are doing."

Outside the colony, the researchers measured the baby penguins' weights, as well as the beaks, flippers and feet. Then, the team took a few drops of blood from the chicks to test their DNA. (Past studies have shown that the king penguin colonies have adjusted to these human intrusions.)

The team analyzed about 65,000 snippets of DNA from eight king penguins. Because the base pairs, or letters in DNA, mutate at a slow but somewhat predictable rate over time, calculating how many of these stretches of DNA contain the same letter sequence can reveal how long ago the population expanded.

The team found that most of the genetic regions were very similar in the penguins, indicating that they originated from a very small initial population. Furthermore, the population began expanding about 15,000 years ago — right after the last ice age was ending and the glaciers were retreating from the islands.

"Just as soon as the breeding sites were available, then the population just skyrocketed," Trucchi told Live Science.

The new model underscores conditions the penguins need to thrive, which could help researchers predict how penguins will adapt to climate change.

But the future doesn't look so hot for the blubbery birds. Current models predict that unmitigated climate change will push the polar front south, taking the penguins' summer staple of lanternfishes farther from the islands.

This will make it hard for the penguins to live on the islands, as they need to feed their chicks frequently in the summer, and can only swim so far to do that, Le Bohec said.

"If we don't change our human behavior, I think in 200 years, it will be quite nasty for king penguins," Le Bohec said.

The study was published today (June 10) in the journal Proceedings of the Royal Society B.