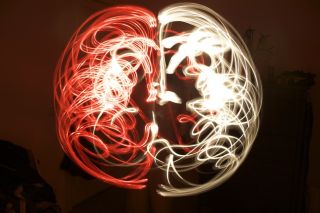 Until a few decades ago, neuroscientists had one way to plumb the human brain : wait for disaster to strike people and, if the victims pulled through, see how their minds worked differently afterward. These poor men and women endured strokes, seizures, saber gashes, botched surgeries and accidents so horrific — like having a 4-foot iron javelin driven through the skull — that their survivals seemed little short of miracles.

To say these people "survived," though, doesn't quite capture the truth. Their bodies survived, but their minds didn't quite; their minds were warped into something new. Some people lost all fear of death; others started lying incessantly; a few became pedophiles.

But however startling, in one way, these transformations proved predictable, since people with the same deficit tended to have damage in the same area of the brain — offering vital clues about what those areas did. There are a thousand and one such stories in neuroscience, and "The Tale of Dueling Neruosurgeons (Little, Brown and Co., 2014)" recounts the most fascinating of them, resurrecting the lives of the kings, cannibals, dwarfs and explorers whose struggles made modern neuroscience possible.

Many of these people's lives are inherently dramatic, because their ailments felled them within days, even minutes. And as far as possible, rather than just recite the details of doctors' visits or provide a litany of one brain-scan study after another, this book enters into the minds of victims, to give you a sense of what it's like to actually live with crippling amnesia or the conviction that all your loved ones have been replaced by imposters.

Not all the stories are tragic, either. Some are plain enchanting, like those about people whose senses fuse together in trippy ways, so that odors make noises and textures produce flashes of color. Some are uplifting, like tales of blind people who learn to "see" their surroundings through batlike echoes. Even the stories about accidents are, in many cases, stories of triumph — stories about the brain's resiliency and ability to rewire itself. [Why It Pays to Taste Words and Hear Colors ]

In general, each chapter in the book recounts one narrative tale; that's how the human brain remembers information best, in story form. And these tales remain relevant to neuroscience today. Take the chapter excerpt provided here, which shows the genesis of modern neuroscience in one of the most important cases in medical history: a jousting accident involving King Henri II of France in 1559. The rival "dueling neurosurgeons" of the title banded together to try to save Henri, and his symptoms over the next two weeks foreshadowed most of the great themes over the next four centuries of neuroscience — including some, like the aftereffects of concussions , that we're still grappling with today. Henri got hurt more than four centuries ago, but football players and soldiers with head injuries are still learning the same hard lessons about the vulnerability of the brain.

Above all, I wrote "The Tale of the Dueling Neurosurgeons" to answer a question: Where does the brain stop and the mind start? Scientists have, by no means, answered that question. How a conscious mind emerges from a physical brain is still the central paradox of neuroscience. But we have some amazing leads now, thanks largely to those unwitting pioneers — those people who, usually through no fault of their own, suffered freak accidents or illnesses and essentially sacrificed a normal life for the greater good.

In many cases, what drew me to these stories was the very commonness of their heroes, the fact that these breakthroughs sprang not from the singular brain of a Broca or Darwin or Newton, but from the brains of everyday people — people like you, like me, like the thousands of strangers we pass on the street each week. Their stories expand our notions of what the brain is capable of, and show that when one part of the mind shuts down, something new and unpredictable — and sometimes even beautiful — roars to life.