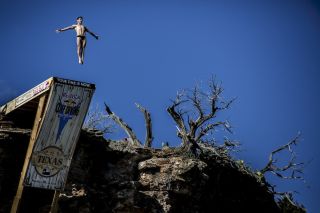 It's a classic diving competition taken to extreme limits: The 2014 Red Bull Cliff Diving World Series — an event that sees world-class divers plunge from jaw-dropping heights — will be making a stop in Texas this weekend.

Elite male and female divers from around the world are scheduled to compete Saturday (June 7) in Hell's Gate, Texas. The event will be the second of seven stops for this year's Red Bull Cliff Diving World Series, which began May 10 in Cuba, and will end in Brazil on Oct. 19.

As its name suggests, cliff diving is an outdoor spectacle that involves leaping from dizzying heights into freshwater lakes and other bodies of water. [See incredible photos from the 2014 Cliff Diving World Series]

Throughout the Cliff Diving World Series, participants free-fall from structures that are nearly three times taller than the 33-foot-tall (10 meters) platforms used in Olympic diving events. For Saturday's competition in Texas, male athletes will be required to dive from nearly 92 feet (28 m), and female divers will plunge from almost 66 feet (20 meters) above the surface of the water.

At Hell's Gate, the competitors will gracefully leap, twist and turn in mid-air, before landing in the deep waters of Possum Kingdom Lake, nestled in the valley of the Palo Pinto Mountains.

Saturday's showdown in Texas will also be this year's first women's competition of the World Series. Seven female divers, including three American women, are expected to compete in Hell's Gate.

On the men's side, Blake Aldridge of Great Britain is currently in the lead, with 200 points. Jonathan Paredes, of Mexico, and Gary Hunt, of Great Britain, round out the top three positions with 160 and 130 points, respectively.

American diver Steven LoBue, who is currently in fifth place with 90 points, will be looking to move up the ranks in Texas. In addition to braving extreme heights, he said much of the excitement from the Cliff Diving World Series comes from the unique settings at each stop of the competition.

"The challenge comes from the actual locations we go to," LoBue told Live Science. "Whether it's frigid waters in Ireland to warmer climates in Spain — each place presents challenges."

After Texas, the World Series will travel to Ireland, Norway, Portugal and Spain, before ending with a final face-off in Brazil.

LoBue said cliff diving, which began on the fringes of the sporting world, has undergone a rapid evolution since the first Red Bull Cliff Diving World Series in 2009. This can be seen not only in the growing popularity of the extreme sport, but also in the impressive performance of the intrepid divers.

"We're still seeing guys do things that nobody thought was possible," LoBue said. "With the number of flips — of course, there's a limit — we just don't know what that is now. For now, the limitations only come with lack of creativity."

The Hell's Gate competition will take place at Possum Kingdom Lake, beginning at 1:30 p.m. local time. The event will be televised in the U.S. on Fox Sports 1 on July 21 at 7 p.m. EDT (check local listings).