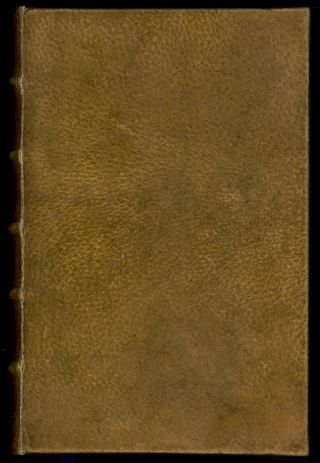 In the mid-1880s, Arsène Houssaye’s book, Des destinées de l’ame, was bound in human skin from the unclaimed body of a female mental patient who had died of a stroke. Scientists at Harvard University tested the binding, and are 99% confident that it is of human origin.
(Image: © Houghton Library/Harvard University)

Harvard recently announced a somewhat unsettling fact about one of the books in its library collection — it's bound in human skin.

Houghton Library, the university's repository for rare books and manuscripts, confirmed Wednesday (June 4) that its copy of Arsène Houssaye's "Des destinées de l'ame" (Destinies of the Soul) is without a doubt swathed in the hide of a human being.

The discovery was not entirely shocking to conservators and scientists at Harvard, who were privy to a strange note left inside the book by its original owner, Ludovic Bouland. A friend of Houssaye's, Bouland was a doctor and bibliophile who received the book as a gift in the mid-1880s and, according to the note he left behind, proceeded to bind it with skin from the unclaimed body of a female mental patient who had died of a stroke. [15 Weird Things Humans Do Every Day, and Why]

The note, originally written in French and here translated by Harvard, reads: "This book is bound in human skin parchment on which no ornament has been stamped to preserve its elegance. By looking carefully you easily distinguish the pores of the skin. A book about the human soul deserved to have a human covering: I had kept this piece of human skin taken from the back of a woman. It is interesting to see the different aspects that change this skin according to the method of preparation to which it is subjected. Compare for example with the small volume I have in my library, Sever. Pinaeus de Virginitatis notis which is also bound in human skin but tanned with sumac."

Despite this fairly straightforward clue, it wasn't until yesterday that scientists at Harvard confirmed that Bouland's bizarre choice of material wasn't a hoax. Using several different methods, including peptide mass fingerprinting and a type of liquid chromatography, the researchers concluded with 99 percent certainty that the binding is of human origin.

The peptide mass fingerprinting technique used by researchers required that microscopic samples be taken from various locations on the binding, the Houghton Library blog reports. The technique, which identifies proteins by identifying the masses of their peptides and then matches that with proteins in a database, helped to reveal the source of the binding material.

Bill Lane, director of the Harvard Mass Spectrometry and Proteomics Resource Laboratory, and Daniel Kirby, of the Straus Center for Conservation and Technical Studies at Harvard, said that the PMF from "Des destinées de l'ame" matched the human reference sample and clearly eliminated other common parchment sources, like sheep, cattle and goat.

"However, although the PMF was consistent with human, other closely related primates, such as the great apes and gibbons, could not be eliminated because of the lack of necessary references," the researchers said in their results.

To rule out other primates, the researchers further analyzed samples from the binding using the liquid chromatography chemical analysis. This method allowed them to determine the order of amino acids in the samples' peptides and further revealed that the binding was almost certainly human.

"The analytical data, taken together with the provenance of "Des destinées de l'ame," make it very unlikely that the source could be other than human," Lane said in a statement.

This discovery marks the first time that one of Harvard's rare books was determined to be bound in human skin. Two other tomes that were believed to share this strange distinction have since been tested, and they are bound in something less controversial — sheepskin.

But as an earlier blog post from Harvard's Houghton Library explains, the practice of binding books in human skin isn't as unusual as it may sound. The term for this outdated practice is anthropodermic bibliopegy, and it originated in the 16th century.

According to the blog post's author, Heather Cole, an assistant curator of modern books and manuscripts at the Houghton library — starting in the 1500s, the confessions of criminals were occasionally bound in the skin of the convicted. The bodies of executed criminals were also donated to science, the author notes, the skins distributed to tanners and bookbinders. But perhaps most noteworthy for today's bibliomaniacs, it would seem that at one time requesting to be memorialized in the form of a book was actually considered normal.