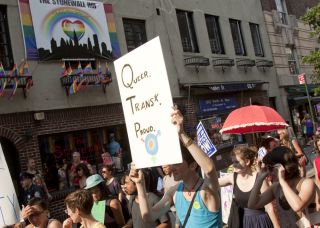 Other U.S. sites important to the LGBT community will join the legendary Stonewall Inn on the nation's list of historic places. Shown here, activists march past the New York City tavern on the 8th Annual Trans Day of Action on June 22, 2012.
(Image: © Glynnis Jones / Shutterstock)

The National Park Service is launching a study to identify and commemorate sites and events important to the history of lesbian, gay, bisexual and transgender (LGBT) Americans, U.S. Secretary of the Interior Sally Jewell announced last week.

The undertaking is part of a broader initiative by the Obama administration to include the contributions of underrepresented groups in the country's historical narrative. Jewell announced the new study outside the Stonewall Inn in New York City — currently the only LGBT-related site designated as a historic landmark by the National Park Service. The tavern was the site of a 1969 riot that is considered a crucial milestone in the fight for gay and lesbian rights.

"We know that there are other sites, like Stonewall Inn, that have played important roles in our nation's ongoing struggle for civil rights," Jewell said in a statement. "The contributions of women, minorities and members of the LGBT community have been historically underrepresented in the National Park Service, and the LGBT theme study will help ensure that we understand, commemorate and share these key chapters in our nation's complex and diverse history."[10 Milestones in Gay Rights History]

That diverse history inevitably includes the stories of the LGBT movement and the places where they unfolded, said Tim Gill, founder of the Gill Foundation, an LGBT advocacy group, which will co-fund the study.

"LGBT history is American history," Gill said in a statement. "The contributions of LGBT people are part of the great American journey toward full equality, freedom and liberty for all our citizens."

The National Park Service will begin to work with scholars over the next year to discover ways to memorialize LGBT heritage. The public is invited to take part in the meetings, which begin this month in Washington, D.C.

The National Park Service listed several goals for the initiative, including finding and nominating LGBT-associated sites as national historic landmarks, encouraging community members to tell the stories of these landmarks, and ensuring that heritage sites spread the word about the LGBT stories associated with them.

The LGBT theme study expands on work started in 2010 by the National Historic Landmark Program, which began searching for sites associated with LGBT history that could be listed in the National Register of Historic Places, the nation's list of properties believed to be central to its history and worthy of preservation.