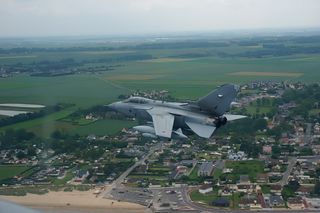 An RAF Tornado GR4 flies over the Normandy coast ahead of the D-Day 70th anniversary commemorations.
(Image: © © Crown copyright 2014)

In honor of this month's 70th anniversary of the D-Day invasion, pilots from Britain's Royal Air Force recreated the first images taken of the fateful landings on the beaches of Normandy by their counterparts during World War II.

Two Tornado jets used modern technology to recreate the images of the French beaches Gold, Juno, Utah and Sword, where the Allies landed on June 6, 1944. On that day, Air Commodore Andrew Geddes, flying a 2 (AC) Squadron Mustang, snapped the first pictures of the D-Day landings. Two other aircraft, piloted by Flight Lieutenant R. H. G. Weighill and Flying Officer H. J. Shute, were also flying overhead at the moment when the Allies first landed on the Normandy beaches, according to the U.K. Ministry of Defence.

"After imaging the D-Day beaches from 20,000 feet (6,100 meters) using the same type of reconnaissance pod that we were flying with in Afghanistan only a fortnight ago, we flew down the beaches at 1,000 feet (300 meters), replicating Air Commodore Geddes' flight," Holmes told the U.K. Ministry of Defence. "It is difficult to imagine the apocalyptic vision that [Commodore Geddes] was faced with."

During World War II, the British squadron took these images using large, bulky cameras attached to the bottom of the aircraft. More than 30 flights would have been required to produce a panorama of the beaches of Normandy. Today, these images can be captured in a single flight, according to the Ministry of Defence.

Today, Tornado jets are equipped with a suite of precision-guided weapons and some of the best reconnaissance sensors, including the RAPTOR (short for reconnaissance airborne pod for Tornado), which can read the time on the face of London's iconic Big Ben clock from the Isle of Wight, located nearly 100 miles (160 kilometers) away.

The 70th anniversary of D-Day falls on Friday, June 6.