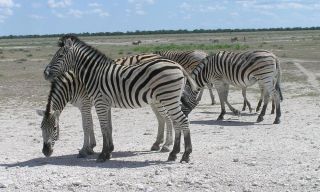 In the grasslands and floodplains of southern Africa, conservationists observed a 300-mile (500 kilometers) zebra migration — the longest known trek of any land mammal on the continent.

The discovery provides a surprising glimpse at how wildlife endure even amid declining populations of species around the world, the researchers said.

"We're living in an age where the great migrations are declining," said Robin Naidoo, a researcher for the World Wildlife Fund (WWF) and the lead author of the new study. "Songbirds in the United States are not migrating like they used to. Large mammals in south[ern] Africa are declining. It's fascinating to discover this one migration that nobody's known about until now, and especially in such a well-known, well-studied animal." [Quest for Survival: Photos of Incredible Animal Migrations]

For the study, published May 27 in the journal Oryx, Naidoo and his team tracked eight female Burchell's zebras (Equus quagga burchellii) for two consecutive years using GPS collars. The eight zebras belonged to a population of thousands that made the trek back and forth between Namibia and Botswana over several months. The zebras traveled a total of 300 miles, tracing a natural migratory route marked by wet or dry seasons, food supply and water — a route that the authors said could be "ancient."

The zebras spent the October dry season along the Chobe River — which runs through Namibia and the border of Botswana — before starting to move south into Botswana as the days became rainy. What surprised the researchers most was that the zebras traveled on a straight path. This direct point-to-point journey surpasses the distance traveled by the previous record holders for the longest land migration: the mammals of the Serengeti.

During the Serengeti migration, wildebeests, gazelles, zebras and other large land mammals travel from Tanzania to the Maasai Mara Reserve in Kenya. Though the Serengeti course covers 500 miles (800 km), the mammals meander and circle backward, making the point-to-point distance traveled shorter than the trek made by the Burchell's zebras.

Today's direst threats to wildlife migration include the construction of guarded borders between countries, and railroad tracks and highways that block animal movements and change their environments. A 2011 study published in Oryx described a 15,000-year-old zebra migration in Botswana that had vanished after the construction of fences in 1968, but emerged again in 2004 when the fences were removed.

The new study — a collaboration among WWF, the Namibia Ministry of Environment and Tourism (MET), conservation group Elephants Without Borders (EWB) and the Botswana Department of Wildlife and National Parks — suggests that in spite of human intervention, some migratory traditions can persevere.

Naidoo told Live Science that the beauty of the discovery is that the migration took place entirely within the Kavango Zambezi Transfrontier Conservation Area (KAZA). KAZA, which spans five African countries and covers an area the size of Sweden, is the largest transborder conservation area. Multinational conservation efforts are not easy, Naidoo said, given the need for coordination among several countries with different economic statuses and stages of development. But conservation areas like KAZA eliminate the presence of human-constructed barriers or fences, to allow animals to migrate freely in their natural habitat, Naidoo said.

"In Africa, wildlife migrations have declined or disappeared, often due to fences that have blocked the migratory routes," Naidoo said in an email. "So to discover a new migration in this era is a major surprise. In addition, this migration takes place entirely within KAZA. So we've now got this strong scientific basis that protected area complexes the size of KAZA are needed to conserve the space needs of wildlife species like [the] zebra."

Editor's note: This article has been updated to change a quote from Naidoo about wildlife migration conservation and fences. The earlier quote was unclear and may have been confusing to readers.