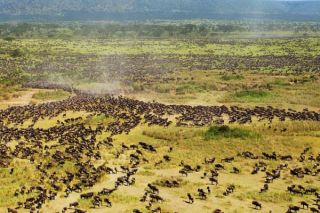 Newark, N.J. — Building an elevated highway across the Serengeti may not sound like the most feasible or wise idea. But that's exactly what Kenyan scientist and conservationist Richard Leakey proposed yesterday (May 14), saying it could be the best solution for humans and wildlife.

In Tanzania and Kenya, there has been debate about how to connect the Lake Victoria region and its growing human population with areas to the east. A plan to build a highway connecting the two regions has been hotly contested, because the road would traverse the iconic Serengeti, which is home to some of the world’s most magnificent wildlife and habitat.

The plan to build any kind of road through the Serengeti is controversial because of concerns about the road's impact on the many animals that migrate through the area. These animals include more than 1 million wildebeest and zebra, which make up one of the most amazing animal migrations on the planet. Truckers currently have to take a road that circumvents Tanazania's Serengeti National Park and Kenya's Maasai Mara National Reserve — a long journey. [Quest for Survival: Incredible Animal Migrations]

International pressure from environmental groups helped force the Tanzanian government to scrap plans for a paved highway through the Serengeti in June 2011, according to the BBC. But demand for a road is growing, and many see construction as inevitable.

Speaking yesterday (May 14) at a conference on wildlife crime and poaching here at Rutgers University Leakey — son of famed paleontologist and fossil hunters Louis and Mary Leakey, and himself a paleoanthropologist — said building an elevated highway would allow animals to cross underneath. The 30-mile-long (48 kilometers) road would also allow drivers to see the creatures pass by.

"It would be a grand spectacle, to see animals migrating by underneath, and signal Africa's commitment to wildlife," Leakey said during the keynote speech he gave at the meeting. "If I can drive over 30 miles of elevated highways in New Jersey, why not in the Serengeti?"

It would cost about 40 percent more than a paved highway, Leakey said, and the money would have to come from international donations. But the problem isn't money, he added — it's political will.

Leakey's talk focused mostly on poaching and how to curb it, but he used the Serengeti highway as an example of what can be accomplished if people think outside the box. Currently, the plan for the road is at a standstill, and Leakey said little will be accomplished by people continuing to "talk, talk, talk."

Leakey is noted for finding the "Turkana Boy," the nearly-complete skeleton of a young hominid who lived in Kenya about 1.5 million years ago. While leading the Kenya Wildlife Service in 1989, Leakey came up with the idea of torching 12 tons of elephant tusks to bring attention to the widespread poaching of the animals for their tusks, which are valued for their ivory. The ploy worked, cutting the value of ivory by a factor of 30 and almost single-handedly suppressing elephant poaching for nearly two decades, Ronald Clarke, a Rutgers criminologist who helped organize the conference, told LiveScience.

Leakey said the way to fight poaching is to make people aware of the problem, and to address the underlying poverty that motivates people to kill and traffic animal products like rhino horns. (Rhino poaching is raging out of control and is worse than it has ever been.) He also advocated building more fences around large reserves — a suggestion that was met with some resistance by at least one ecologist present at the conference, who questioned Leakey after his talk about the fence's ability to stop elephants. Leakey noted that electrified fences were quite capable of stopping the large animals. In places where they've been installed, he added, sheep herders have come to rely on fences to protect their flock — meaning they can help both people and animals, he said.

The talk was warmly received by the audience, a mixture of biologists, criminologists, conservationists and other curious students.