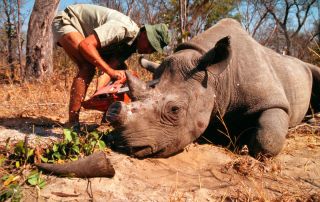 Dehorning of a rhinoceros by a field researcher
(Image: © © Michel Gunther / WWF-Canon)

Rhinoceros poaching soared to a record high level in South Africa last year. The country's government said 668 rhinos were killed within its borders in 2012, up from 448 in 2011, according to the World Wildlife Fund, an international conservation group.

A whopping 425 of those deaths last year occurred in Kruger National Park, a top safari destination and home to South Africa's largest population of both black and white rhinos. That figure marks a sharp increase from the 252 rhinos killed in the park in 2011.

The poaching boom is largely due to heightened demand for rhino horns in Asia, where the grim prizes are believed to have medicinal properties and are seen as highly desirable status symbols, especially in Vietnam. TRAFFIC, a nongovernmental global network that monitors wildlife trade, recently issued a report describing how some affluent Vietnamese individuals often use the horn as a hangover cure and general health tonic, grinding it up and mixing it with water or alcohol.

"Viet Nam must curtail the nation’s rhino horn habit, which is fuelling a poaching crisis in South Africa," Sabri Zain, TRAFFIC's director of advocacy, said in a statement. "Rhinos are being illegally killed, their horns hacked off and the animals left to bleed to death, all for the frivolous use of their horns as a hangover cure."

According to WWF, an additional five rhinos have been killed since the beginning of 2013, and two men were arrested in separate incidents in Vietnam and Thailand this month for smuggling rhino horns.