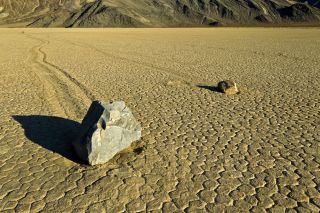 Heavy rocks like these seem to slide across the surface of Racetrack Playa in Death Valley National Park.
(Image: © Anatoliy Lukich | Shutterstock.com)

California's remote, beautiful, and foreboding Death Valley has held a mystery for almost a century: it has stones that seem to move on their own, when no one is looking. It happens at Racetrack Playa, a dry lakebed known for its "sailing stones." This effect occurs at a few other places as well, though Death Valley is the most famous spot. Thanks to some high-tech sleuthing, the mystery may have been solved, at least partly.

In their book "Mysteries of the World: Unexplained Wonders and Mysterious Phenomena," Herbert Genzmer and Ulrich Hellenbrand state that "the perfectly flat, dry ground is scoured and scraped with paths that suggest these boulders are being moved along the ground... there is no indication of how this movement could have been brought about by outside forces, and no stone has ever been observed actually making its way across the ground."

Not all of the stones in Death Valley move. Those that do only move every two to three years, and they don't all move at the same time or in the same direction. In fact, some seem to have made abrupt 90-degree turns, judging from the tracks, which range from tens of feet to hundreds of feet long. Most of the stones are not huge boulders but instead range from about 6 to 18 inches (15 to 45 centimeters) in diameter.

Several theories have been proposed to explain this curious phenomenon, including some sort of localized, unknown magnetic effect. This theory has been discounted for a variety of reasons including that many of the stones do not contain significant amounts of magnetic elements such as iron, and that the stones should gradually assemble in one place — which they don't. Some have suggested that the strong winds that blow through the area might move the rocks after the lakebed has become slick.

The most likely solution to the mystery involves a combination of wind, temperature and water. Although Racetrack Playa is a dry lakebed, it is not always dry; in fact, water collects on the surface after rainfall or when snow from surrounding peaks melts. Brian Dunning, a California researcher who discussed this mystery on his Skeptoid podcast, notes that when water is present and the temperature falls below freezing — as it sometimes does — a thin sheet of ice is created: "Solid ice, moving with the surface of the lake and with the inertia of a whole surrounding ice sheet, would have no trouble pushing a rock along the slick muddy floor... As the wind shifts and the flow ebbs, these ice floes drag the rocks across the slippery mud surface in zig-zagging paths, even moving heavy rocks and sometimes dragging some but washing past others nearby."

NASA researcher Ralph Lorenz became intrigued by the enigmatic stones while studying Death Valley weather conditions. He developed a tabletop experiment to show how the rocks might glide across the surface of the lakebed.

"I took a small rock and put it in a piece of Tupperware, and filled it with water so there was an inch of water with a bit of the rock sticking out," Lorenz told Smithsonian.com.

After putting the container in the freezer, Lorenz ended up with a small slab of ice with a rock embedded in it. By placing the ice-bound rock in a large tray of water with sand at the bottom, all he had to do was gently blow on the rock to get it to move across the water. And as the ice-embedded rock moved, it scraped a trail in the sand at the tray's bottom.

Though such explanations are plausible, they were very difficult to prove since no one had actually seen or recorded the stones' movements. Understandably, no one has volunteered to spend every minute of their lives — day and night for several years — enduring temperatures that can reach well above 100 degrees F (37 C), hoping to see a stone move. Furthermore, Racetrack Playa is almost three miles long and over a mile wide (4.8 by 1.6 kilometers). A person of course can't be everywhere at once, and would have to pick one or two rocks to closely and continually monitor just in case they happen to suddenly move. And can you imagine the frustration if someone spent two years watching a non-moving rock, only to later learn that several other rocks on another part of the lakebed had moved while they weren't watching?

Fortunately, the technology exists to investigate the mystery remotely. In 2013, a team of scientists using rocks with motion-activated GPS units and time-lapse photography captured the first video footage of the stones creeping across the desert floor.  [Related: High-Tech Sleuthing Cracks Mystery of Death Valley's Moving Rocks]

It turns out that jagged plates of thin ice, resembling panels of broken glass, bulldoze the rocks across the flooded playa. Driven by gentle winds, the rocks seem to hydroplane atop the fluffy, wet mud. The scientists revealed their findings in the Aug. 27 issue of the journal PLOS One.

The mystery has not been solved completely, however. The video shows how smaller rocks move, but no one has ever seen the gigantic playa boulders budge an inch. Another process may be at work on the biggest rocks, according to Jim Norris, an engineer and member of the team.

"I know there are people who like the mystery of it and will probably be somewhat disappointed that we've solved it," Norris said. "It's a fascinating process, and in many ways I hope that there's more to be discovered. Never say never."

Benjamin Radford, M.Ed., is Deputy Editor of Skeptical Inquirer science magazine and author of seven books including Scientific Paranormal Investigation: How to Solve Unexplained Mysteries. His website is www.BenjaminRadford.com.