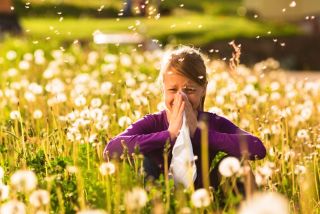 Misery loves comfort, and with approximately 50 million Americans plagued by seasonal allergies, there are plenty of people feeling miserable and seeking comfort when pollen is in the air.

But in an attempt to relieve their sneezing, stuffy or runny noses, and itchy eyes, allergy sufferers might make a few mistakes.

The good news is that "seasonal allergies are totally treatable," said Dr. Clifford Bassett, medical director of Allergy and Asthma Care of New York. "The key is to have a plan in place."

Bassett described seven common mistakes that people with seasonal allergies make, so you can know to avoid them.

When people with allergies feel lousy, they may head to the drugstore and try a variety of products, such as antihistamines, nasal sprays and eye drops. This isn't necessarily a smart or cost-effective way to relieve their symptoms, though. It's better to see an allergist who can pinpoint exactly what your allergies are and create an allergy action plan, said Bassett, a fellow of the American College of Allergy, Asthma and Immunology.  [9 Weirdest Allergies]

"Wind is not a good friend to people with seasonal allergies," Bassett told Live Science.But when the weather gets warm, it's tempting to let fresh air and cool breezes into your home or car. "This is a big mistake for people with seasonal allergies because this allows pollens to visit," Bassett said. He recommends keeping windows shut, running the air conditioner to recirculate inside air and using HEPA (high-efficiency particulate air) filters to trap pollen.

Mistake 3: Not taking steps to keep pollen away

Your shoes, clothes, hair and glasses can all track pollen from outside into your home. Pets also bring pollen inside, so keep them clean. You should keep your own hair clean, too. "Wash hair at the end of the day to avoid transferring pollen to your pillowcase and sleeping on a pollen cloud," Bassett advised. It can also help to use saline nasal sprays, which are like a shower for your nose, to gently irrigate pollen from it, Bassett said. He also recommended that people avoid hanging laundry on an outdoor clothesline during allergy season.

Many people don't realize that lots of pollen enters the body through the eyes, Bassett said. Protecting your eyes offers a great opportunity to reduce the pollen load your body experiences, he said. A brimmed hat and sunglasses can help block pollens from your face before they find their way into your nose and eyes. Eye rinses can wash away pollen, and antihistamine eye drops can relieve red, itchy eyes.

Treat allergies at the onset of pollen season, rather than waiting until symptoms get more severe, Bassett said. He advises his patients to begin taking their medications one or two weeks before their allergy season typically begins. A proactive approach works better for many people; it may reduce the severity of symptoms, and the patient may end up needing less medication, Bassett explained.

When some people with pollen allergies eat certain fresh fruits and vegetables, it may result in an itchy mouth or throat. This is known as oral allergy syndrome. The allergic cross-reaction occurs shortly after the offending food is eaten. It happens because the immune system recognizes a similarity between proteins in some pollens and those in fruits, vegetables, nuts and spices. For example, a person with a birch pollen allergy may develop oral allergy symptoms after eating an apple, carrot, peach, almond or hazelnut. Sometimes peeling, cooking or avoiding the food altogether during allergy season may prevent symptoms, Bassett said.