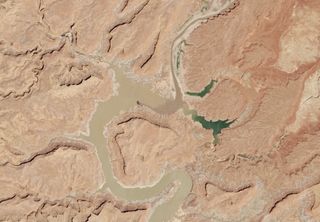 The mud-choked Colorado River flows through the dry lakebed of northern Lake Powell in a new satellite image released yesterday (May 22).

Western drought has left this reservoir on the border of Utah and Arizona less than half full, the satellite image captured on May 13 reveals. As of May 21, the lake was at 42 percent of capacity, according to U.S. Bureau of Reclamation (USBR) data.

Lake Powell is crucial for both water and electricity. Some 20 million people drink water from the reservoir; the controversial Glen Canyon dam, which created the lake, produces about 4.5 billion kilowatt-hours of hydroelectricity a year, on average, according to the USBR. [Photos: Stunning Views of the Colorado River]

But 14 straight years of drought have done a number on Lake Powell's levels. Lake Powell was at 94 percent capacity in 2000, according to NASA's Earth Observatory, which released the image. Between now and then, all but three years have been years of drought. The reservoir will probably top out around 51 percent of capacity in 2014. Lake levels are likely to drop even more over the next few years, perhaps reaching 3,536 feet (1,080 meters) above sea level, or 164 feet (50 m) feet lower than a full pool of 3,700 feet (1,128 m) above sea level. To get a sense of the amount of volume lost in that sort of drop, consider that Lake Powell covers 254 square miles (658 square kilometers).

The effects of a half-full Lake Powell are varied. Glen Canyon National Recreation area, which encompasses the lake and much of its surroundings, is currently warning park visitors to take care using boat launch ramps into the park. Because the water levels are so low, water on the ramps is very shallow and leads to sudden drop-offs. But tourists may have reasons other than boating to come to the area. The lower-than-usual water levels have revealed spots flooded after the creation of the Glen Canyon Dam in the 1960s.

Among these spots are the Cathedral in the Desert, a water-carved grotto partially exposed by low lake levels. Another beloved spot, Rock Creek Canyon, features an exposed arch that boaters can float beneath.

The low water has also revealed bad news in the form of an extensive infestation of quagga mussels, an invasive species that multiply quickly, compete with native species for food and can clog water intake pipes. In February, National Park Service officials reported that dropping water levels had revealed more than 1,000 mussels attached to canyon walls, the Glen Canyon dam and other underwater structures.