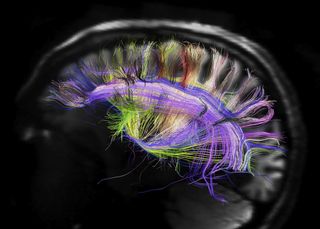 The brain's white matter is composed of neural fibers that connect various regions of the brain and enable them to communicate.
(Image: © Image courtesy of MGH-UCLA Human Connectome Project)

More than a million American students misuse prescription drugs in hopes of boosting their attention, memory or energy levels. But taking these drugs could cause long-term impairments in brain function, recent animal studies suggest.

"Smart drugs" that may improve brain performance in the short term appear to have lasting effects on developing brains, making them less adaptable for multitasking, planning ahead and organizing, researchers say.

Human brains continue developing into a person's 20s and 30s, particularly the prefrontal cortex, an area involved in planning and decision-making, said Dr. Wen-Jun Gao, a neuroscientist at Drexel University College of Medicine in Philadelphia. [10 Facts Every Parent Should Know About Their Teen's Brain]

Brain-enhancing drugs may increase the release of brain chemicals like dopamine, which can improve memory, learning and motivation in the short term. But, as with anything, "if it's too much, it's not good," said Gao, who co-authored a paper summarizing the research on the long-term effects of brain-enhancing drugs, published Tuesday (May 13) in the journal Frontiers in Systems Neuroscience.

"Any drug that stimulates too much dopamine release can cause problems," Gao told Live Science.

The most popular drug for enhancing mental performance is methylphenidate, more commonly known as Ritalin or Concerta, which is prescribed to treat people with attention deficit hyperactivity disorder (ADHD). About 1.3 million American teenagers had misused methylphenidate in the previous month, according to a survey by the Partnership at Drugfree.org and the MetLife Foundation.

Studies in juvenile rats have shown that even low doses of methylphenidate can affect developing brains by impairing nerve activity, working memory and the ability to switch between tasks.

Other popular brain-boosting drugs include modafinil, sold as Provigil, a drug used to treat people with narcolepsy and other sleep disorders, as well as for alertness by U.S. Air Force pilots. Modafinil can boost memory, alertness and number ability, and is thought to increase dopamine levels in the synapses between brain cells. But the drug may have similar long-term effects to methylphenidate, research suggests.

The U.S. military is currently investigating another class of drugs called ampakines, for boosting soldiers' alertness. The drugs bind to receptors in the nervous system to boost nerve signals and strengthen neural connections. Ampakines have been found to improve memory and cognition in healthy human volunteers and in rats, but could pose a threat to young brains.

Abuse of these drugs could overstimulate the nervous system, damaging or killing cells, the researchers said.

Much more research on the effects of smart drugs is needed, Gao said.