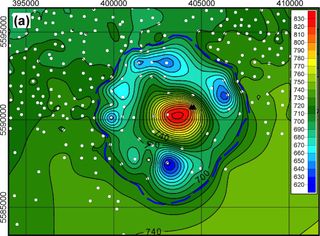 This is a map showing the structure and contour of the Bow City crater, possibly created by a giant meteorite impact. Color variation shows meters above sea level.
(Image: © Alberta Geographic Survey/University of Alberta)

An ancient ring-shaped structure in southern Alberta, Canada, likely formed when a meteorite smashed into Earth, producing a 5-mile-wide (8 kilometers) crater. The impact would have produced enough energy to destroy a region the size of the land area of New York City, researchers say.

A geologist discovered the structure near the village of Bow City, although time and glaciers have mostly eroded the signs of the ancient meteorite strike. Scientists can't say for sure that a meteorite impact created the Bow City crater, but seismic and geological evidence strongly support this notion.

"An impact of this magnitude would kill everything for quite a distance," Doug Schmitt, a rock physics expert at the University of Alberta, Canada, said in a statement. If the strike happened today, the city of Calgary, which is 125 miles (200 km) to the northwest, would be "completely fried," and in Edmonton, which is 300 miles (500 km) northwest, "every window would have been blown out," he added. [See Images of Bow City Crater & Other Impact Craters]

Researchers say the collision occurred within the last 70 million years. In the intervening time, about a 1-mile-deep (1.5 km) layer of sediment has eroded, making it tough to pin down the exact date when an object carved out the crater.

Only the "roots" of the crater are left, a semicircular dimple with a peak in the middle. The crater was probably 1 to 1.5 miles (1.6 to 2.4 km deep) — strong enough to decimate most life in the area, researchers said. The object that pummeled out the crater would have sprayed out lots of debris, which could have had global effects, possibly for decades, they said.

The discovery was detailed online ahead of print in the journal Meteoritics & Planetary Science.