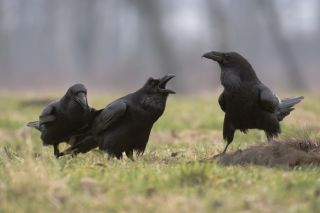 Don’t even go there, girlfriend!
(Image: © Raven image via KOO/Shutterstock)

Humans and their primate cousins are well known for their intelligence and social abilities. You hear them called bird-brained, but birds have demonstrated a great deal of intelligence in many tasks.

However, little is known about their social skills. A new study shows that ravens are socially savvier than we give them credit for. They are able to work out the social dynamics of other raven groups, something which only humans had shown the ability to do.

Bullying in the community

Jorg Massen and his colleagues of the University of Vienna wanted to find out more about about bird’s social skills, so they studied ravens, which live in social groups. In their study, published in Nature Communications, they looked at whether ravens were intelligent enough to understand relationships in their own social groups, as well as if they could figure out social groups that they had never been a part of.

Ravens within a community squabble over their ranking in the group, as higher ranked ravens have better access to food and other resources. Males always outrank females and confrontations mostly occur between members of the same sex.

These confrontations are initiated by high-ranking ravens, who square up to low-ranking birds and emit a specific call to assert their dominance. Normally, the lower-ranking, or submissive, raven typically makes a specific call to recognise the high-ranking raven’s social superiority. Through this process, the dominant raven ensures that its social position is maintained.

But sometimes, the lower-ranking bird does not respond in a submissive way to a dominance call – this is known as dominance reversal call. These situations often result in confrontations, and can result in changes in the social structure of raven communities.

Massen and his team kept a group of captive ravens and made recordings of conflicts. These included normal conflicts (in which the lower-ranking bird responded submissively to a dominance call) and dominance reversal conflicts. The same method was also used to capture the calls from a different group ravens that were housed separately.

Individual ravens were then taken from the group and isolated in a separate enclosure. The recordings of different calls were then played, mimicking a situation in nature where a raven overhears two other ravens in a confrontation.

Massen said: “We monitored their responses to these calls to see if they reacted differently to normal dominance calls and dominance reversals. We also used the recordings taken from the foreign group, to see if our ravens recognised the same behaviour in other communities.”

When presented with a dominance reversal recording taken from their own group, ravens displayed behaviour associated with stress, because they expected a disturbance in the social order. This stress is typically expressed by the raven either running around or pecking at its own feathers.

Ravens showed even higher levels of stress when they were played a dominance reversal call from members of the same sex. This makes sense, because ranking disputes only occur between members of the same sex. A confrontation between two females, for example, would not have a big effect on the social status of a male raven – but would affect any females who were listening.

Female ravens in general were more stressed than males when they were played dominance reversal recordings. This may be because females are always lower ranked than males, so changes in community structure pose more risks to females at the bottom, which have reduced access to food in the first place.

But perhaps the most impressive finding was that ravens seemed to notice dominance reversals in a foreign group of ravens, although they exhibited less stress than when they heard such calls from their own social community. To be sure that the ravens weren’t just recognising that call because it was an audibly different call, Massen played calls from a different community, which weren’t dominance reversal calls, and saw that the captive ravens were not stressed.

Massen said: “This shows that ravens are able to create a mental representation of relationship dynamics from groups they have never interacted with before, just like us when we watch television. This ability has not even been observed in monkeys yet.”

There are limitations. Alex Thornton of the University of Exeter explained: “The results in this study are no doubt exciting, but it should be recognised that captive ravens were used. Being kept in such close proximity, with only each other, may have influenced the ravens ability to judge each other’s behaviour.”

In addition to showing that ravens have social abilities that were previously only seen in humans, these findings give a clue that raven intelligence may have evolved along with the development of social communities.

“Being intelligent helps the ravens play the politics of their social group, and gain dominance. For example, understanding the rank of members of their group would help ravens know which birds to pick on, which ones to team up with and which ones to steer clear of during their quest for dominance,” Massen said.