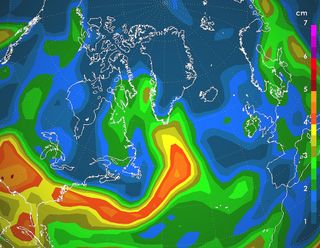 In a reversal of this year's extraordinary winter weather, Greenland suffered the wrath of North America's epic heat waves in 1889 and 2012, a new study reveals.

"Last winter in the eastern United States, people associated the cold with the behavior of the polar vortex," said lead study author William Neff, a fellow at the Cooperative Institute for Research in Environmental Sciences (CIRES) at the University of Colorado, Boulder. "In fact the polar vortex can show two faces: a cold one or a warm one depending where you are. Last winter it showed its cold face to folks in the East. In the summer of 2012 it showed its warm face." [Video: 2 Extreme Melt Events 123 Years Apart]

Though more than a century apart, both massive surface melts were triggered by soaring temperatures east of the Rocky Mountains, according to findings published yesterday (April 24) in the Journal of Geophysical Research: Atmospheres. It turns out that North America's furnacelike heat was funneled toward Greenland by an atmospheric river, a narrow, fast-flowing current of moist, warm air, Neff and his co-authors found. A warmer-than-average ocean off Greenland moistened the scorching air as it blasted north.

"Air was taken from the heat wave in the Midwest, moved to the east and then traveled over the ocean picking up moisture on the way to Greenland, where the warm air and clouds helped melt the ice over highest levels of Greenland," Neff told Live Science by email.

Both 1889 and 2012 saw record-shattering summer melts that liquefied nearly all of Greenland's icy surface. Ice core records suggest similar extreme melts hit about once a century between A.D. 750 and A.D. 1250, during a warmer North Atlantic climate known as the Medieval Warm Period.

Earlier research had already identified the culprits in 2012's incredible thaw — warm air and thin clouds insulating the island like a blanket — but scientists were curious about what caused the remarkable weather pattern.

"These rare melt events on the highest elevations of Greenland require an unusual coincidence of factors," Neff said. "Understanding how they come together may help us better forecast the future of Greenland's ice and snow."

On the West Coast of the United States, atmospheric rivers deliver winter rain and snow, such as the Pineapple Express, which carries tropical moisture from Hawaii to California. But atmospheric rivers can form around the world, even in Antarctica.

The findings help explain why it's so rare for the entire Greenland ice sheet to melt in toasty summer weather.

Atmospheric rivers reach Greenland only when atmospheric pressure patterns, such as ridges and lows, free a path for North America's heat and moisture to travel northward.

"Distortions in the jet stream must happen in just the right place to direct atmospheric rivers toward Greenland," Neff said. "That may be one reason extreme melt events there have been relatively rare."

A sophisticated computer model of historic weather patterns suggests the same factors underlie Greenland's 1889 surface melt. In the summer of that year, heat waves in the Rocky Mountains and eastward drove temperatures as much as 15 to 20 degrees Fahrenheit (8 to 11 degrees Celsius) higher than average, and a severe drought gripped the northwestern and Upper Midwest states, according to weather records.

In the summer of 2012, temperatures east of the Rocky Mountains were also about 15 F (8 C) higher than normal.

Neff did note one significant difference between the two heat waves — Rocky Mountain forest fires. In 1889, forest fires burned freely, and soot from the extensive flames can be found in Greenland ice cores. Studies show snow and ice coated in soot will melt faster than clean snow and ice.